These characters are the least powerful villains in the series — unless you count the power of verbal and physical abuse. Their crimes consist of looking down on and sometimes abusing the good ponies, and they don't have major schemes beyond this. They are mostly Smug Snake jerks who talk a good game, but can't back it up once in a corner. 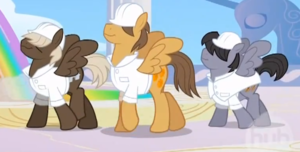 From left to right: Dumbbell, Hoops, and Score
Debut: "Sonic Rainboom"
Voiced by: Kathleen Barr (present-day Hoops), Terry Klassen (past Hoops), Richard Ian Cox (present-day "Dumbbell"), and Brian Drummond (past "Dumbbell")note the last one according to this

A group of three muscle-headed Pegasi living in Cloudsdale who used to tease Rainbow Dash and Fluttershy. They later apologized for their teasing after seeing Rainbow Dash's Sonic Rainboom. 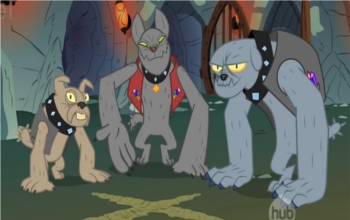 The Diamond Dogs show you where to dig.note From left to right: Spot, Rover, and Fido.
One of the dig dogs: 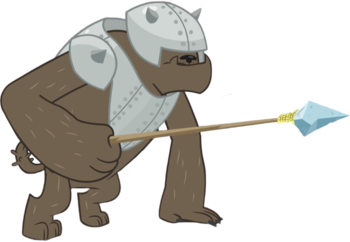 "We hunt for gems. But you are a better hunter. So now we hunt... for you!"
Debut: "A Dog and Pony Show"
Voiced by: Scott McNeil (Rover), Gary Chalk (Fido), and Lee Tockar (Spot)note Tockar was confirmed by Tabitha St. Germain at the 20:57 mark of this Comic Con 2012 video

; Fido was originally believed to be voiced by Richard Ian Cox, but this has since been revealed to be an error on St. Germain's part.

The Diamond Dogs, led by Rover, Fido, and Spot, are a group of ugly, dirty, greedy and stupid canine-like creatures who live underground and are obsessed with gems. They ponynap Rarity and force her to work for them in an attempt to use her gem-finding skills to obtain more gems. 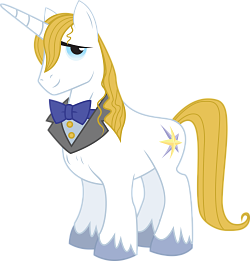 Don't be fooled by that look. He's not as charming as you hope (and even he knows it).
Debut: "The Best Night Ever"
Voiced by: Vincent Tongnote according to this

Princesses Celestia and Luna's far-removed nephew. A white unicorn with a gold mane, he is Rarity's dream stallion. Rarity falls in love with him at first sight only to find out he's a self-obsessed jerk. He also makes a major appearance in the IDW comic My Little Pony Friends Forever Issue 26. 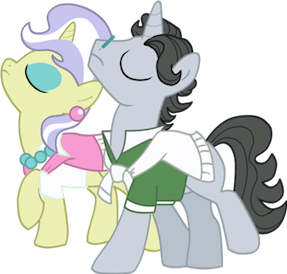 Your chapeau is too country for them.
Debut: "Sweet and Elite"
Voiced by: Peter New (Jet Set) and Ashleigh Ball (Upper Crust)

A snobby married couple who live in Canterlot. They kick off the plot of "Sweet and Elite" when they insult Rarity's breeding and only shut up when they realize that she has become popular among their "friends", in particular Fancypants. 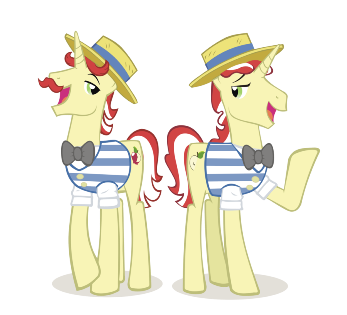 They're bringing opportunity to your very community. note Right's Flim, left's Flam, they're the world-famous Flim-Flam Brothers!
Debut: "The Super Speedy Cider Squeezy 6000"
Voiced by: Samuel Vincent (Flim), Scott McNeil (Flam)note both according to this tweet by Jayson Thiessen

Flim and Flam are Unicorn brothers and self-proclaimed "traveling sales-ponies nonpareilnote Without equal" who roll into Ponyville one day in season 2 with their fancy new cider press, the Super Speedy Cider Squeezy 6000. They end up challenging the Apple clan to a cider-making contest, goading them into wagering the rights to sell cider in Ponyville. They later return in season 4, running a Medicine Show and peddling "miracle cure-all tonic". They return again in season 6, as ticket salesmen in Las Pegasus. 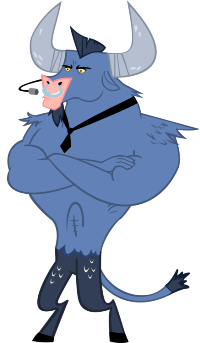 "Iron Will's my name, training ponies is my game!"
Debut: "Putting Your Hoof Down"
Voiced by: Trevor Devallnote according to this

A boisterous minotaur who runs a motivational seminar that helps meek ponies like Fluttershy become more assertive. Of course, his lessons aren't free...

He reappears in Season 7 in "Once Upon a Zeppelin", having quit his job as a motivational speaker in favor of organizing airship cruises. 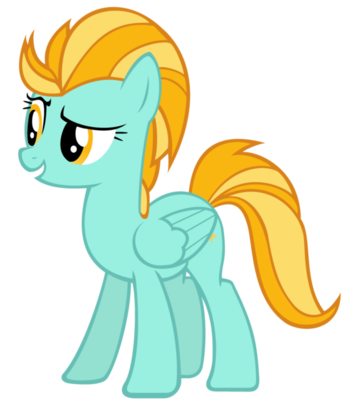 A cadet at the Wonderbolt Academy, where pegasi train to join the Wonderbolts. She pushes herself to become the best of the best fliers in Equestria, but her reckless way of going about it gets her fellow cadets hurt, and she has no sympathy for those endangered or harmed by her actions. 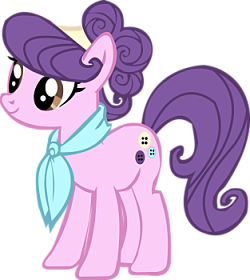 An acquaintance of Rarity's who takes part in the Fashion Week contest in Manehattan. She steals a bolt of Rarity's new personal fabric to make her own designs with — or rather, to make her assistant Coco Pommel make them. 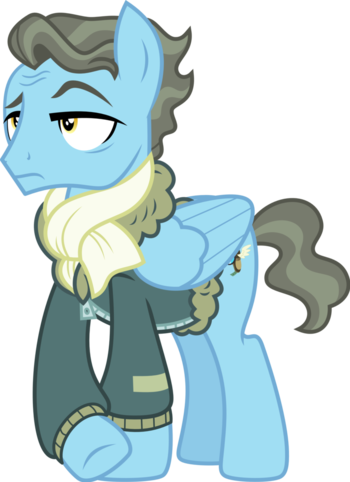 And the horseshoe winds up on the other hoof.
Debut: "Rarity Investigates!"
Voiced by: Jan Rabson

A retired former member of the Wonderbolts, he is the current holder of a long-distance speed record with the Wonderbolts that still stands. Afraid of Rainbow Dash beating his record, he devises a plot to send Spitfire on a Wild Goose Chase making it look like she disappeared and pin the blame on Rainbow so she gets kicked out of the Wonderbolts. 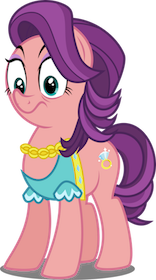 Where Diamond Tiara gets "it" from.
Debut: "Crusaders of the Lost Mark"
Voiced by: Chantal Strand

Diamond Tiara's mother and Filthy Rich's wife. She is a haughty, self-centered mare who thinks herself above everypony else. She expects her daughter to follow in her hoofsteps by placing high expectations and berating her for any failure. Her maiden name is Spoiled Milk. 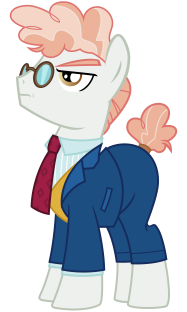 The manager for the biggest popstar of all Equestria, Countess Coloratura. In actuality, a demanding, controlling narcissist who exploits Coloratura's fame for his own gain and live his life in comfort. 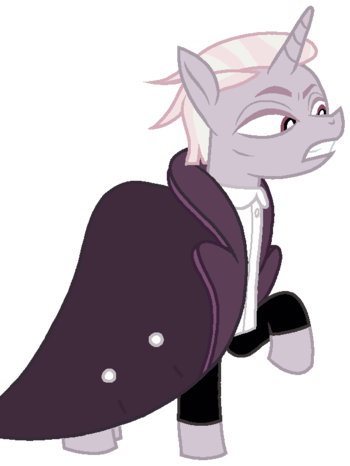 Debut: "Spice Up Your Life"
Voiced by: Fiona Hogan

A famous restaurant critic in Canterlot with very specific tastes. Any restaurant that she praises is marked with her three hoofprints.

Gladmane
"Oh, you can't trick a confession out of a pony like me! I'm always one step ahead." 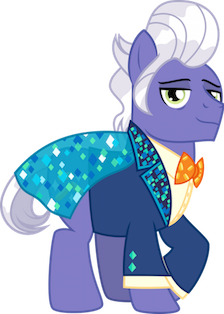 The owner of a resort in Las Pegasus that Fluttershy and Applejack are sent to by the Cutie Map. He professes to be everypony's friend and to keep his employees loyal through The Power of Friendship, although his talent for keeping them divided and bickering may also be a part of it... 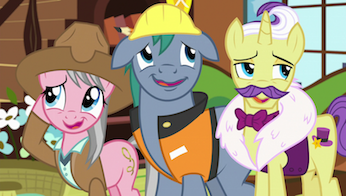 A group of ponies Fluttershy's friends enlist to help her realize her dream of building an animal sanctuary in Ponyville. All are experts in their respective crafts, but don't regard others very highly at all. 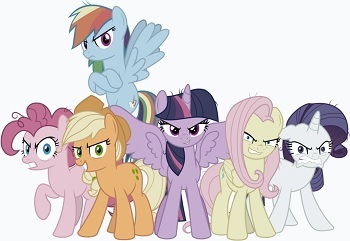 Evil copies of the Mane Six created by Queen Chrysalis in a plot to acquire the power of the Elements of Harmony. Instead of helping her, they attempt to take the power for themselves. They also somehow initiate a case of Mistaken Identity among the real Mane Six, causing a rift amongst them which is soon resolved. They eventually are "killed" by the Tree of Harmony. 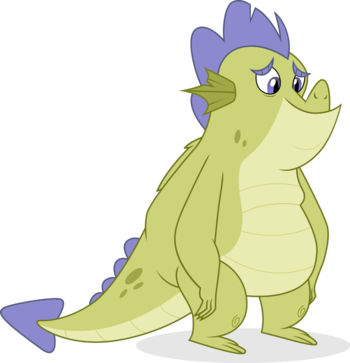 A fat dragon who arrives in Ponyville and claims to be Spike's father, but there's more to him than meets the eye.