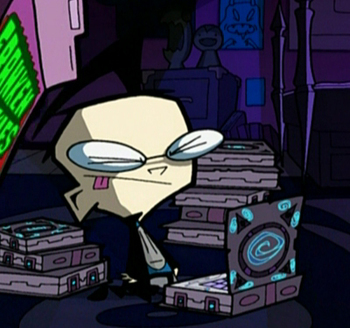 Somewhere at the three-way intersection of the Nerd, the Dogged Nice Guy and The Woobie, there is a character who is, quite frankly, a huge dork. He is socially awkward, not conventionally attractive, and a failure at his attempts to win the pretty girl (if he can even get a complete sentence out in her presence). And we root for him, because he's just so humble and adorable in between his flashes of brilliance. He might be capable of heroics if pushed, but he is generally not the Badass Bookworm (at least, not yet). He's smart but generally only in the hard sciences or obscure topics, giving him a possible foot in the door as a tutor to The Chick or an assistant to The Hero. Will almost always be The Smart Guy in any team he's a part of, if not The Lancer. Often subject to geeky turnons.

For a lustable nerd, see Nerds Are Sexy. Has a high chance of being Endearingly Dorky. Often overlaps with Nerds Are Innocent and Science Hero, sometimes with Playful Hacker and Loon with a Heart of Gold. May be at odds with a Nerdy Bully.