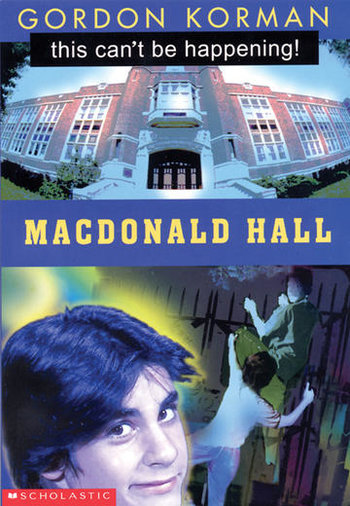 A series of novels written by Gordon Korman — the first as a project for his Grade Seven English class.

Bruno Walton and Melvin 'Boots' O'Neal are roommates at a prestigious boys' boarding school called Macdonald Hall,note Yes, with a lower-case 'd'. It's named for Canada's first Prime Minister, Sir John A. Macdonald. overseen by stern Headmaster William Sturgeon (known affectionately as 'The Fish'). The books generally feature the completely irrepressible — not to say irresponsible — Bruno trying to achieve some goal via a series of increasingly crazy plans, often getting the entire student body involved by the time he's done. The equally excitable Cathy Burton and her fellow students across the road at Miss Scrimmage's Finishing School for Young Ladies frequently work themselves into the mix as well. More cautious Boots spends much of his time trying to keep his friends in check, but it rarely has much of an effect.

Hilarity Ensues. Quite a lot of it, actually.

Despite the similar sounding name, there's no connection between this and Mac Hall the webcomic.