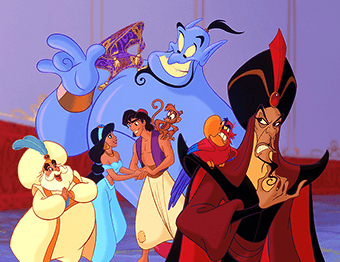 The one(s) on the right.
"In a comic you know how you can tell who the arch villain's going to be? He's the exact opposite of the hero!"
— The Villain, Unbreakable
Advertisement:

A quintessential villain, who acts as an evil foil to the hero's personality and is a main block to his journey towards his destiny. These villains will always end up existing as an obstacle to, or as a consequence of, The Hero's Journey, and they generally have the following characteristics:

In a nutshell, a villain who is iconically evil and represents a certain sin deep down, who deceives the heroes to further his own ends, is essential to the heroes' Character Development, and is defeated iconically in a super-dramatic final battle, usually due to his own flaws.

This is extremely common in Disney Animated Canon, where it could be said that any given villain follows this formula, though the Trope Codifiers may be in the works of William Shakespeare, where, likewise, any given villain could fit this mold perfectly. Such a character is often a Satanic Archetype, as Satan is a clear shorthand for evil in Western culture.

While not particularly subtle or original, these traits are widely used for a reason and Tropes Are Tools is fully in play. Used correctly as a structure (and not an exhaustive list) these traits highlight both the hero and villain in contrast, hopefully making both more memorable and giving them chemistry with each other, justify the villain's actions in terms of his emotional traits, and gives them a sendoff that feels appropriate to the audience.