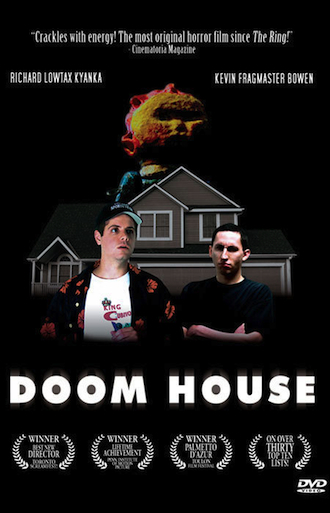 My name is Reginald P. Linux, and ever since my wife died I've been very depressed. This is why I've been searching for the house of my dreams, but as a philosopher once said, "Be careful what you dream for because you JUST... MIGHT... GET IT."
— Opening Monologue
Advertisement:

is a 2003 short film directed by and starring the filmmaking power duo of Rich "Lowtax" Kyanka and Kevin "Fragmaster" Bowen of Something Awful.

After the heartbreaking death of his wife leaves a severe depression weighed heavily on his soul, Reginald P. Linux (Kyanka) packs his bags and searches for a new place to call home, an escape from the blinding guilt and torment wrenching his conscience. But just when he thinks he has found the perfect home, Reginald only discovers that he has tumbled into a frightening, macabre world of unspeakable terrors that threatens to shatter his very existence and fragile sensitivity. Along with the help of a friendly plainclothes police officer who may or may not be what he appears (Bowen), Reginald attempts to unravel the bloody, horrifying secrets of the Doom House...

The film was accompanied by an incredibly fawning review

at Something Awful by Ben "Greasnin" Platt, who praised it as a masterpiece, giving it a score of 46/50 while noting, "This film achieves a level of realism that is unheard of, while still using tried and true methods of cameraplay and misdirection to craft together a story that keeps you on the edge of your seat from the opening title to the haunting twist ending."

The smash success of Doom House led to a sequel, Mood House

, with Opposite Day dialogue as well as the order of the sequence of events and the roles played by the actors reversed, and an anime series in Japan

Tropes found in Doom House include: