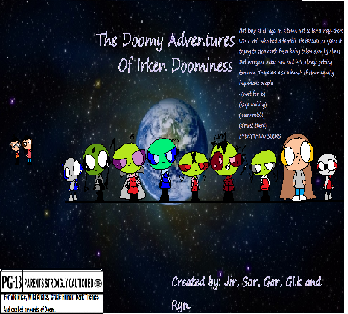 From Left to right Deef, Alyssa, Jir, Sor, Gl.k, Melissa, Gar, Ryn, Ink, Nel and Nano In a world of Loads and Loads of Characters there are still many more not listed here.
If you were looking for a story about happy aliens who help humans do miraculous things, please reread the title of this page, if you already did there is something wrong with your INFERIOR HUMAN BRAIN!. No this is a Invader Zim Spin-Off .....Thingy. Or rather a Play By Post Game Set in the same general universe with some Fanon characters and even some Canon Characters Like Zim, Dib and Skoodge appear. There is also a GrimDark Universe where Roleplayers also set scenes. So now sit back and get your FILTHY HUMAN EYEBALLS ready to read the most random things a Group of Invader Zim loving Kids can come up with.
Advertisement: