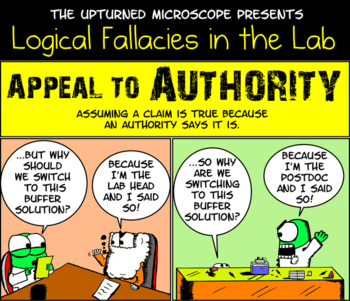 This fallacy name is commonly applied to two similar but distinctly different fallacies: Appeal to Authority, and Appeal to Irrelevant Authority. It's more-or-less the opposite of Ad Hominem.

Appeal to Authority (or Argument from Authority)

Implying or stating that there is a causal relationship between who says it and whether it's true or not:

"Newton said that for every action there is an equal and opposite reaction, so there is."

It is true for most physical interactions that there is an equal and opposite reaction to an action, and it's true that Newton said so, but it's not true because Newton said so.

While it can be valid to call upon expert opinion to support a position, it is not valid when the status of the person as an expert is the only thing called upon. While the statement may be true, it is not true because the authority stated it. Calling on your own authority is never valid, since if your opponent accepted you as an ironclad authority on what you were talking about, you would not be having a debate in the first place.

In real life, this fallacy shows up most often in discussions or arguments about both hard science and soft sciences like sociology.

Tropes which rely on or use this fallacy

More accurately called Irrelevant Authority, Inappropriate Authority, or Questionable Authority, Irrelevant Authority is citing someone as an expert even though they are not really an expert on the question under discussion; their expertise is in an unrelated field; their "expertise" is not in a legitimate discipline at all (e.g. an "expert" psychic or ghost hunter); their expertise is what is under discussion; they have not been demonstrated to actually exist; or they made the statement in a state where their judgment was suspect (ie, they were drunk, high, senile, stressed, angered, etc). In some cases, they do possess a legitimate expertise and renown in some field, it's just that said field is unrelated to the one being discussed.