I'm Not a Doctor, but I Play One on TV 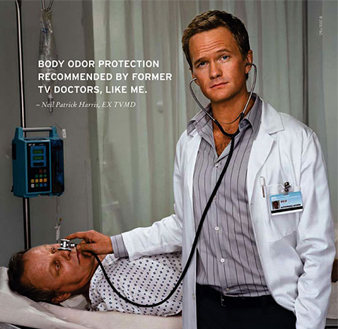 Trust him, he's a doctor. On TV.
"You're a credulous git, Mr. Pepperdyne; a stethoscope and a plausible manner do not make a doctor."
— A Bit of Fry and Laurie
Advertisement:

Sometimes, it would be really great to get a doctor or other medical authority to say something nice about your product and or service on TV. However, for some reason — FDA approval, budget, truth-in-advertising laws prohibiting advertisers from passing non-doctors off as doctors, etc. — it will not be possible to actually get a real doctor to do this.

The solution: dress an actor up in a white lab coat, and give them a stethoscope. Even if he is a dentist. If possible, put them in a set that looks like a waiting room, pharmacy, or hospital. As long as you don't say they're really a doctor, you aren't going to get in trouble, and you still get the subliminal boost in believability that comes from associating the trappings of real medicine with your product.

Trope named for a commercial from the 1980s in which Chris Robinson, who played a physician on General Hospital, opened his pitch for Vicks Formula 44 cough syrup with this very line, which became a pre-Internet Memetic Mutation. (How does playing a doctor on TV give someone any authority to prescribe actual medicine?)

See also Trust Me, I'm a Doctor and Uncertified Expert.

No relation to Playing Doctor or …But I Play One on TV.