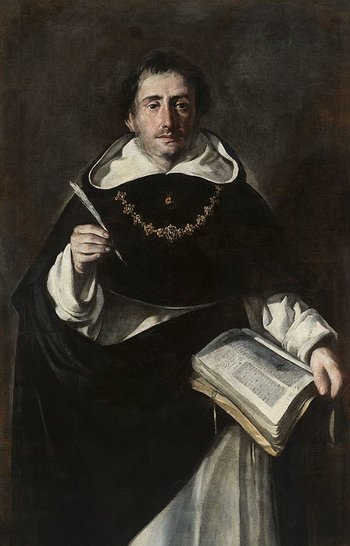 A portrait of the Angelic Doctor by Antonio del Castillo y Saavedra
"It was necessary for our salvation that there be a knowledge revealed by God, besides philosophical science built up by human reason. Firstly, indeed, because the human being is directed to God, as to an end that surpasses the grasp of his reason. 'The eye hath not seen, O God, besides Thee, what things Thou hast prepared for them that wait for Thee' (Isaiah 64:4). But the end must first be known by men who are to direct their thoughts and actions to the end. Hence it was necessary for the salvation of man that certain truths which exceed human reason should be made known to him by divine revelation."
—St. Thomas Aquinas, Summa Theologiae (I, q. 1, art. 1)

Saint Thomas Aquinas (c. 1225 - 7 March 1274) was a Dominican priest, theologian, philosopher, and Doctor of the Church from Rocca Secca (a town in present-day Lazio). He is one of the prominent figures of a medieval philosophical movement known as scholasticism. He is immensely influential in the development of Western philosophy and Christian theology. A lot of modern philosophy built on or opposed his ideas and in Christian theology, he influenced not only Catholic theology, but also a significant amount of Protestant theology.

St. Thomas was born in Rocca Secca around 1225 or 1227 to a noble family: Landulph, Count of Aquino; and Theodora, Countess of Teano. Landulph's brother Reginald was abbot of Monte Cassino, the oldest abbey of the Benedictine Order. St. Thomas was the youngest of the nine children; his older brothers pursued military careers, but his family intended for him to become an abbot just like his uncle, in accordance with the custom of the times.

At the age of five, St. Thomas received his education from the Benedictines of Monte Cassino. There, he was noted to be diligent in study and devoted to prayer, and would surprise his teachers by frequently asking: "What is God"? He was then transferred to the University of Naples around the year 1236, where he studied the Trivium, consisting of grammar, logic, and rhetoric; and the Quadruvium, comprising music, arithmetic, geometry, and astronomy. Here, St. Thomas was probably introduced to Aristotle and two other Aristotelians, Averroes and Maimonides. These three philosophers would influence his thought deeply, and he would devote much of his work to synthesizing a number of ideas from Aristotelianism with Christian theology.

During his studies in Naples, St. Thomas encountered John of St. Julian, a Dominican priest who was stationed there. Influenced by his preaching, St. Thomas resolved to become a Dominican, much to the amazement of the city and the horror of his family; they found it surprising that a noble would give everything up to don the garb of poor friar. Theodora hastened to Naples to see her son, but the Dominicans, fearing she would take him away, sent him to Rome, where he would be taken to Paris or Cologne. As St. Thomas was journeying to Rome, his brothers, who were soldiers under Emperor Frederick, captured St. Thomas near the town of Aquapendente and took him to his parents' fortress of San Giovanni at Rocca Secca, where he was detained for two years.

During these two years, his family attempted to dissuade St. Thomas from joining the Dominicans, but St. Thomas stood his ground. At one point, his brothers attempted to dissuade St. Thomas by hiring a harlot to seduce him, believing that a liaison would be enough to force him to stop pursuing his vocation out of shame. Amazingly, St. Thomas took a burning brand, drove her away, and traced the sign of the cross with the brand. Afterwards, St. Thomas went into prayer and was said to have fallen asleep while two angels girded him with a white cord. From that day forward, St. Thomas never experienced even the slightest motions of lust.

Those two years in captivity did not go to waste. St. Thomas passed his time by reading the Bible and a book of theology known as The Four Books of Sentences, written by scholastic theologian Peter Lombard. He also communicated with the Dominicans and kept the observances of the Order, and tutored his sisters, even convincing one of his sisters to become a Benedictine nun. Seeing that all the attempts to dissuade him had failed, Theodora relented somewhat and arranged for St. Thomas to escape at night through the window; she thought a secret escape from detention would be less damaging to her family's dignity than an open surrender to the Dominicans. Not to mention that Johannes Teutonicus, who was master general of the Dominicans at the time, filed a complaint against the family to Pope Innocent IV.

St. Thomas immediately pronounced his vows and was sent to Rome, and then went to Cologne to study under another Dominican theologian and philosopher known as St. Albert the Great. During his studies under St. Albert, St. Thomas received the nickname "The Dumb Ox" because of his size and his quiet demeanour being mistaken for signs of dullness. However, St. Albert came to his defence, proclaiming: "You call him a Dumb Ox; I tell you this Dumb Ox shall bellow so loud that his bellowings will fill the world."

In 1250, St. Thomas was ordained into the priesthood, and up to two years later, he took the office of Bachelor (sub-regent) in the Dominican studium in Paris. This was the beginning of his public career, for his teaching attracted the attention of both the professors and students. His duties there consisted primarily in providing commentary for The Four Books of Sentences. His commentaries on this book would provide the material and, in great part, the plan of his greatest work, the Summa Theologiae.

During this time, St. Thomas was preparing to obtain a doctorate in Theology from the University of Paris, but the conferring of the degree was postponed, due to a dispute between the university and the friars. The university, jealous of the friars' autonomy, closed the schools, and the teachers swore not to reopen until their demands were granted, and decreed that no one should be granted the degree of Doctor unless he took an oath to follow the same line of conduct, but the friars refused to take the oath. At one point, a William of Saint-Amour wrote a work called The Perils of the Last Times, a scathing attack on the friars, and declared that they have no right to occupy chairs in the university. St. Thomas retaliated with a treatise called Against Those Who Assail the Worship of God and Religion, defending the friars. Eventually, William of Saint-Amour's work was condemned by Pope Alexander IV on 5 October 1256, and the Pope ordered that the friars be admitted to the doctorate. St. Thomas was given the doctorate on 23 October 1257.

From this time, St. Thomas's life may be summed up in a few words: praying, preaching, teaching, writing, and journeying. He eventually surpassed St. Albert in his accuracy, lucidity, brevity, and power of exposition, if not in universality of knowledge, to the point that people were more anxious to hear St. Thomas. He travelled to cities Anagni, Rome, Bolognia, Paris, and Naples, always teaching and writing with one purpose: to explain and defend the Christian faith. He was so devoted to this task that he declined the Archbishopric of Naples, to which he was appointed by Pope Clement IV in 1265.

St. Thomas was also frequently abstracted and in ecstasy, and his religious ecstasies became more frequent. At one point, at Naples in 1273, St. Thomas completed his treatise on the Eucharist. It is said that three brother Dominicans saw him lifted in ecstasy, and they heard a voice proceeding from the crucifix on the altar. Christ said to St. Thomas, "You have written well of me, Thomas. What reward would you have for your labor?" St. Thomas replied, "Nothing but you, Lord". On 6 December 1273, St. Thomas experienced an unusually long ecstasy while celebrating Mass, and after that refused to continue writing on the Summa Theologiae. His friend, Reginald of Piperno, urged him to continue, but St. Thomas replied, "I can do no more. Such secrets have been revealed to me that all I have written now appears to be of little value".

Pope Gregory X convoked the Second Council of Lyons to open on 1 May 1274 and invited St. Thomas to take part in the deliberations; his work concerning the Greeks, Against the Errors of the Greeks, was to be presented. On his way to the council in January, 1274, he struck his head on the branch of a fallen tree and became seriously ill. He was then taken to a Cistercian abbey in Fossa Nuova, where he remained to the end of his days while under the care of the monks. At their request, he provided a brief commentary on the Song of Songs.

As St. Thomas received his last rites, he prayed: "I receive Thee, the price of my redemption, for Whose love I have watched, studied, and laboured. Thee have I preached; Thee have I taught. Never have I said anything against Thee: if anything was not well said, that is to be attributed to my ignorance. Neither do I wish to be obstinate in my opinions, but if I have written anything erroneous concerning this sacrament or other matters, I submit all to the judgment and correction of the Holy Roman Church, in whose obedience I now pass from this life." He eventually died on 7 March 1274.

Numerous miracles attested his sanctity, and he was canonized by Pope John XXII on 18 July, 1323.

St. Thomas also wrote a number of commentaries on the works of Aristotle.