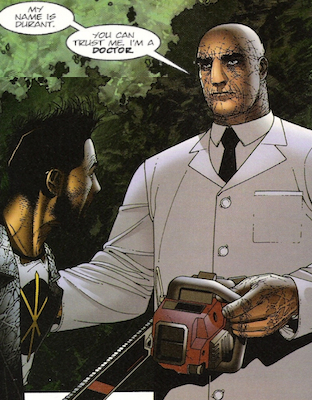 A Stock Phrase used by characters looking to enhance their credibility in dealing with situations or problems that have arisen, where X is usually a type of occupation ("Doctor" being the most popular, by far). Certain jobs and occupations, like practicing medicine, are so universally respected that anybody merely claiming to be of that profession is enough for that person to be taken seriously.

When a problem arises where one's specific job skills and talents can be put into practice, such as after a D.I.Y. Disaster, somebody claiming to be a licensed plumber or architect can easily become a savior, and a cocky hero protagonist full of confidence in one's own expertise gets a pithy one-liner that can be delivered whenever held in doubt.

However, more often in many comedic situations, a speaker may call attention to their personal occupation or area expertise at a time when it would be completely irrelevant to a problem or issue at hand, or, taken to its furthest extreme, the speaker may be revealed as a fraud lacking all of the expertise being claimed.

Very likely to be uttered by a Back-Alley Doctor, a Mad Doctor, or an impostor attempting a Bavarian Fire Drill.

Subtrope of Appeal to Authority; Sister Trope to I'm Not a Doctor, but I Play One on TV and Not That Kind of Doctor; Inverse trope of I'm a Doctor, Not a Placeholder, when a speaker recognizes that their personal expertise is not applicable to the situation at hand. Likely to be the first of many Doctor's Orders in a medical emergency.