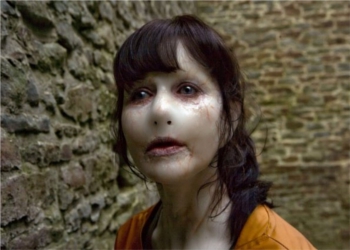 The show decides to take another crack at a clone story...
Cleaves: Once a reading's been taken, we can manipulate its molecular structure into anything. Replicate a living organism down to the hairs on its chinny chin chin. Even clothes. And everything's identical. Eyes, voice—
The Doctor: Mind, soul?
Advertisement:

The one with acid. Strax would be pleased. Oh, yeah. We're not to him yet. Never mind- off you pop.

A solar tsunami sends the TARDIS hurtling towards a 22nd century factory on Earth, where human Doppelgängers ("Gangers") are used to mine dangerous acid. They use white goo called "Flesh" to create avatars, which can safely mine while the people are controlling them with their thoughts.

The Doctor would much rather have this adventure alone, but Amy and Rory insist on coming along. The factory is dangerous. Dangerous enough, in fact, to dissolve the ground around the TARDIS with acid and cause her to sink into the earth. It also dissolved the Doctor's shoes, so he has to borrow a pair of boots.

The second wave of the solar tsunami causes the Gangers to separate from the people they're being controlled by. The clones are now separate, independent people, retaining all of their originals' memories. They are horrified by the fact that they're not "real". They can remember every second of their "original's" life up to that point and feel every emotion they've ever experienced. The white Flesh rebels against the change, and causes their faces to distort.

The Gangers quickly feel threatened enough to start a rebel faction against the real humans. This escalates into an all-out battle, cut off only when it turns out that the Flesh has also made a copy of the Doctor.