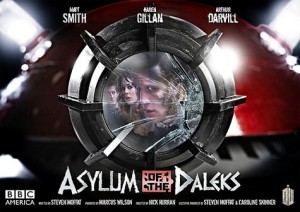 How do you make the Daleks even scarier? By revealing the existence of insane Daleks...
"According to legend, you have a dumping ground. A planet where you lock up all the Daleks that go wrong: the battle-scarred, the insane, the ones even you can't control."
— The Doctor
Advertisement:

The one with Dalek Potter.note One of the Daleks featured in this story has a distinct scar on its casing shaped like a lightning bolt. Once Tumblr spotted it, it was an instant meme.

Written by Steven Moffat, the Nightmare Fuel Station Attendant of the show.

This episode is notable for several reasons (aside from launching Series 7). It marks the start of 50th anniversary celebrations for the series by way of featuring Daleks from every era of the franchise (nearly every Series 7 episode will have some form of Call-Back to the show's long history). It is also notable for the fact that the fandom united in keeping the introduction of (Clara) Oswin Oswald a secret from the general public, despite the episode having had public screenings several times before broadcast.

Prequel:
The Eleventh Doctor is seen in a diner accepting a mission from a strange hooded redheaded woman.

The Episode:
On the ruins of Skaro, the Doctor meets with the same woman in a Dalek-shaped tower to learn the specifics of his mission, only to be whisked away to a new location by the Daleks. Meanwhile, the Ponds, who have had a huge argument, have almost destroyed their marriage. Amy is a successful model but it is not a happy gig. Rory arrives... with the dreaded divorce papers, seemingly ready to put an end to the mess. However, before the signed papers can be filed and made official, both Ponds are teleported where the Doctor awaits them. All three are within the Dalek citadel, where the redheaded woman reveals herself to be a new kind of Dalek agent: the Asylum uses nanogenes to infect trespassers and convert them to sentries, killing them and leaving their corpses as sort of human-shaped Daleks, with eyestalk out of the forehead and the "eggwhisk" out of the right hand. It is here that the Doctor prepares for the worst, on a scale of William Hartnell (One) to David Tennant (Ten) being him (Eleven)... only for the Daleks to begin pleading, "SAVE US." The Doctor is at a loss for words.

Kidnapped by one of his oldest foes, the Doctor is forced on an impossible mission to a place even the Daleks are too terrified to enter... the Title Drop, a planetary prison confining a veritable Continuity Cavalcade of the most terrifying and insane of their kind (from when the First Doctor originally encountered them all the way to the New Dalek Paradigm). When a human starship crashed there and started broadcasting songs from Carmen, the Daleks realized that if something can get in, all the insane Daleks could also get out, which would be really very bad. There's something, or someone, down there that no Dalek wants to go near, so the universe's leading expert on the Fell Saltshakers is forced to beam down to the prison planet to turn off the force field and blow up all the insane Daleks (as well as himself). He is sent in with Amy and Rory since Dalek data indicates that he needs companions at all times, but their marriage is in meltdown. Despite the breakdown of Amy and Rory's marriage, credit where it's due to the Daleks - it's an incredibly well thought out plan.

A genius human hacker, Oswin Oswald (Jenna Coleman), has been stuck on the crash-landed ship for a year. This is a bit of a surprise for the audience since Steven Moffat had stated that she wouldn't be appearing until Christmas — then again, the Doctor tells the Daleks "it's Christmas!", so that's all right then. She's been keeping busy by making soufflés and playing Carmen at high volume to keep out the nightmarish Dalek voices. She's almost impossibly successful in warding off the renegade Daleks: being the best hacker the world has ever known, she effortlessly destroyed the Daleks' security system and kept them away from her base. But the rest of her crew were killed in the crash, and — as they're horrified to find out — turned into sentries by the Asylum's automated system.

As soon as the heroes land, the automated system starts working on them as well. The Daleks gave them wristbands to trick the security system into believing they'd already been converted. Amy manages to lose hers quite early on, and the Dalek mind virus starts "subtracting love and adding anger" — turning her into one of their own. Oswin contacts the group using a makeshift intercom system, but avoids the question of why the Doctor can't establish a video link to her, a clue that leads the viewers to an immediately obvious conclusion. The Doctor asks her how she made soufflés for a whole year — particularly, where she got the milk.

The Doctor rushes off to save Oswin while Rory tries to force Amy to take his wristband. It's simple logic, he explains: if the Daleks "subtract love and add anger", they'll have to spend much more time on him. Because the fact of their marriage is that he loves her more than she loves him (by 2,000 years, to be exact), and she hates him more than he hates her. She responds by slapping him in the face. The reason for their breakup and impending divorce is that Rory wants more children, and thanks to the "tender mercies" of Madam Kovarian, Amy is sterile; she broke up with him to let him go and live a happy life without her. Amy breaks down in tears thinking she's worthless, and Rory reassures her this is not the case. It doesn't matter in the end, because without either of them noticing the Doctor had slapped his own wristband on Amy before running off.

Meanwhile, Oswin has guided the Doctor to her hideout, and has used her suspiciously improbable hacking skills to delete all Dalek knowledge of the Doctor. When he finally reaches her, he's horrified: while her fellow travellers were converted to sentries, the Daleks became aware of Oswin's genius mind and, since the casings are big enough to fit humans, had her placed in one, figured her intellect could enhance the Dalek Hive Mind. What they didn't count on was Oswin being able to retain just enough of her sanity to unknowingly dream a world of cushy couches and soufflés. See, she always had a hard time making them without eggs. You know, eggs, stir, mix, bake... exterminate.

The Doctor gives her a second wind, and since she's indeed a genius hacker, by accessing the Hive Mind, she was able to override all information the Daleks ever had on the Doctor. Which is great, because the Daleks kept growing stronger, and more hateful, and more innovative, every single time the Doctor fought them — every encounter with him just gave them more reason to become more violent. Daleks without knowledge of the Doctor are a fantastic favour to the whole universe. With her last conscious, human thoughts, she shuts off the forcefield, and the Daleks promptly blow up the prison planet with her apparently on it. The Doctor escapes through a sonicked teleport pad, bringing Amy and Rory along with him into the TARDIS as Oswin imparts one last message to the Doctor, one that would have far reaching implications for him and his very soul: "Run, you clever boy. And remember.".

Amy and Rory rather effortlessly resolve their marriage (well, at least until they get home that is... where Amy launches a very steamy look at Rory suggesting he'll be put through his paces), and the Doctor hastily bids goodbye to a collection of extremely confused Daleks who wonder who this Doctor person is and why he's babbling about an Oncoming Storm.

Alternative Title(s): Doctor Who S 33 E 01 Asylum Of The Daleks