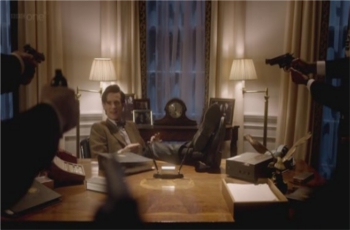 Doctor, remember where you are...
You're going to have to trust us this time.
You have to do this, and you can't ask why.
— Amy Pond
Advertisement:

The one made in America, with Tricky Dick, a queer guy in the FBI (who now brings Superwholock one step closer to reality), an eyepatch lady in the wall, and an assassination... meant for the Doctor.

And the Doctor adopted a Stetson. Which was also shot. But unlike the fez, it lived. Give that hat a Purple Heart... to patch the bullet hole.

Seems like we're forgetting something...
(sound of rattling breathing

Amy and Rory haven't seen the Doctor for two months, though they've discovered references to ridiculous adventures of his throughout history. They receive a letter through the post: a map reference and a date, inside an envelope of TARDIS blue numbered "3". In the distant future, River Song receives a similar envelope, numbered "2", within the Stormcage.

The message leads them all to Utah, where they meet up with the Doctor. Even more time has passed for him since Amy saw him last, he’s nearly two hundred years older, and he talks merrily about the Moon landing in 1969 while stating that they're going to see it now.

But first, the four have a friendly picnic on a present day lakeshore, and the Doctor explains that he's been running away from something for the last two centuries. And he's got to stop running now. The camaraderie is interrupted by the arrival of a number of enigmatic figures: a tall shadow witnessed by Amy, then just as quickly forgotten; an older man carrying a jerry can; and strangest of all, an astronaut rising from the lake. The Doctor warns the others to stay back, whatever happens, before walking forward to talk to the astronaut. After a brief conversation, which neither the other characters nor the audience hear, the astronaut shoots the Doctor, causing his companions to freak out while he begins to regenerate.

And he's quickly shot again. In the middle of regenerating. Which kills him permanently.

The mysterious astronaut then sinks back into the lake, apparently unaffected by an enraged River's gunshots.

Amy can't believe it. But at this point, the old man explains that it is indeed the Doctor, and that he is truly dead. The can he carries contains gasoline, to burn the Doctor's body; River notes empires would fight over the corpse of a Time Lord and Rory suggests they give their friend a proper Viking funeral using a nearby boat. Afterwards, the old man introduces himself as Canton Everett Delaware III, adding that this is the last time he'll see them, but that they'll see him again. He explains his presence as being due to another mysterious envelope, his marked "4". After he leaves, River notices that they haven't seen anyone bearing an envelope with a "1" — who does the Doctor trust most of all?

The answer, to their shock and disbelief, is the Doctor himself — but a younger version, only slightly older than when he left Amy and Rory last series (listing his age as 909). And he's having a Coke at the diner where they all met up earlier that day. After getting past their initial reaction of shock and anger (and after River slaps him in the face), they're able to convince him to travel to 1969. Although hesitant, the Doctor is willing to blindly trust Amy (but not River) after making sure she isn't being compelled or threatened somehow.

In 1969, a younger Canton Everett Delaware III is recruited by President Nixon to investigate a mysterious daily phone call that the President receives from a terrified young girl. Canton isn't thrilled: he was kicked out of the FBI recently because he wanted to get married. Nixon manages to coax him into working as a freelance agent for now. They're interrupted, though, when the TARDIS materialises in the White House and the Doctor fails miserably to be sneaky about it.

Nixon: But who — but who are they? What is that box?
The Doctor: It's a police box, can't you read? I'm your new undercover agent, on loan from Scotland Yard. Code name: the Doctor. These are my top operatives: the Legs, the Nose, and Mrs. Robinson.
River: [scoffs] I hate you.
The Doctor: No you don't.

The Doctor is able to convince the President — after some difficulties with the Secret Service — that he is capable of solving the mystery. He will, however, need A SWAT team ready to mobilize, street level maps covering all of Florida, a pot of coffee, 12 jammy dodgers and a fez. He realises that the child's "name", Jefferson Adams Hamilton, was actually answering the President's question "Where are you?". It's a little girl, and she's is at an intersection of streets each named after these of the founding fathers. (Two of whom, the Doctor remarks, fancied him, but considering the fact that "The Doctor lies...")

Meanwhile, Amy excuses herself to go to the bathroom, because she's feeling sick. In there, she has an encounter with the shadow she saw earlier: a terrifying alien in a nice suit. The thing casually kills another woman, and warns Amy that she must tell the Doctor something. As soon as anyone looks away from these aliens, though, they forget that they have ever seen them. Amy, in a smart mood, manages to take a photo of the creature using her phone.

Our heroes and Canton travel to the location that the Doctor deduced, finding strange alien technology there — including an astronaut suit. The Doctor realises that when the little girl said she was scared of a space man coming to "eat me", she probably meant the suit. River and Rory investigate an underground passage, unaware that it is full of the strange aliens which they keep seeing and forgetting. River tells Rory that she lives her whole life hoping to find the Doctor again, but that each time she sees him, he's younger and he recognises her less and less. One day, she says, she'll look into his eyes and he won't know who she is. And her sheer grief might kill her.

They discover a weird, TARDIS-like vessel which Amy and the Doctor might have recognized, but before they can discover anything about it, something unseen happens to Rory.

Canton runs off after he hears the little girl again calling for help; following him, the Doctor and Amy find him unconscious, his gun lying next to him. As she struggles to remember something, Amy suddenly tells the Doctor that she's pregnant. The Doctor asks why she's telling him, of all people. She tells him that he ought to know the answer to that one. But before she can elaborate, the astronaut appears. Hoping to change time and save the Doctor's life, Amy immediately grabs Canton's pistol and fires at the astronaut... just as it lifts its helmet to reveal that it is the little girl.