Recap / Doctor Who S33 E2 "Dinosaurs on a Spaceship" 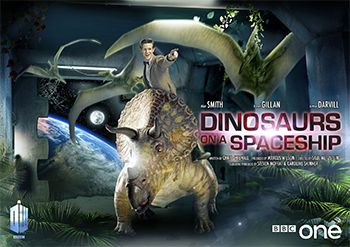 "Go Tricey! Run like the wind!"
Brian: Sorry, sorry. Are you saying dinosaurs are flying a spaceship?
The Doctor: Brian, please, that would be ridiculous. They're probably just passengers.
Advertisement:

The one with more new characters as the plot demands and Rory's dad and his balls and the Doctor's first face, sort of.

It's been nearly a year since Amy and Rory last saw the Doctor, so they're just a bit miffed when he suddenly materialises his TARDIS around them, drags them onto a spaceship the size of Canada in 2367 AD together with companions-of-the-week Queen Nefertiti and John Riddell, explains that the Indian Space Agency is going to shoot missiles at the thing soon because it's headed for Earth, and then immediately gets the whole gang attacked by dinosaurs. They're especially upset because Rory's dad, Brian, was accidentally dragged along. In the middle of changing a lightbulb, no less... which gets broken in his state of bewilderment. The Doctor now owes him a new lightbulb.

As the "Holy Shit!" Quotient shoots through the roof, the Doctor, Rory and Brian are teleported to the engine room. Which turns out to be a beach. With more dinosaurs! They get captured by two pedantic robots (Mitchell and Webb!) and taken back inside, where Amy has discovered that the ship is an ancient Silurian ark. At its core is a smaller ship, containing a bounty hunter called Solomon who had the entire Silurian population Thrown Out the Airlock when he arrived. He plans to sell the dinosaurs to the highest bidder. However, he can't pilot the ship, and it's about to crash into Earth. Despite the Doctor's protests, the Indian Space Agency starts firing its missiles. Solomon, who has forced the Doctor to heal his wounds, claims Nefertiti as his newest prized "object" and plans to add her to his collection of wares. She pointedly disagrees. In the middle of all that, the gang manages to tame a Triceratops, Nefi and John get their flirt on (to Amy's exasperation), and the Doctor kisses a very confused Rory out of sheer joy at all the DINOSAURS! ON A SPACESHIP!

Rory and Brian log into the genetics-based Silurian spaceship controls, Amy and John fight dinosaurs with stun guns and the Doctor and Nefertiti subdue Solomon and decide that he's too much of a monster to live. The Indian missiles are locked onto his ship, which very satisfyingly explodes.

The whole gang takes a moment to simply enjoy the beauty of space with a cup of tea. Brian can't get enough of it, and decides to see the whole world and everything it's got to offer. Nefertiti craves a change of scenery as well, vanishes from Egyptian history forever and decides that John isn't so bad at all and makes a good tent-mate. Amy and Rory decide to take a bit of a break from adventuring. The dinosaurs are also fine, now living in freedom on a planet called "Siluria" thanks to the Doctor.

Alternative Title(s): Doctor Who S 33 E 02 Dinosaurs On A Spaceship