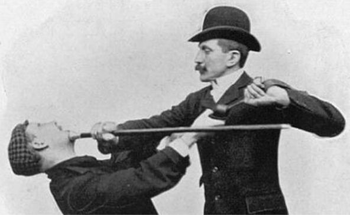 "If you try this at home, you'll quickly find out what Australopithecus already knew — swinging a stick doesn't require a lot of training. In fact, it's so basic one could argue that wooden clubbing has been obsolete nearly as long as our vestigial tails. Once you as a one-day-mugging-victim can distinguish between your cane and your hot dog, you're 85% done with all you need to know about stick fighting."
— Seanbaby, "4 Everyday Items You Didn't Know Were Weapons"
Advertisement:

The use of a cane as an Improvised Weapon. Often associated with When Elders Attack, next to Handbag of Hurt. Given the bent shape, it can also double as a hook. A Justified Trope in that the Korean martial art Hapkido,

and the French Savate

utilize the walking cane as a potentially deadly weapon. Of course, consider for a moment that a cane, to be effective in its designed purpose, has to be strong enough to support a person's weight, and long enough to allow themselves to hold themselves upright with it. That combination makes for a potentially very effective melee weapon.

See also Sword Cane, when the cane is concealing a bladed weapon. May overlap with Parasol of Pain.

Hazel's opponent may be small, but his cane-fighting skills make him a big problem.

Hazel's opponent may be small, but his cane-fighting skills make him a big problem.