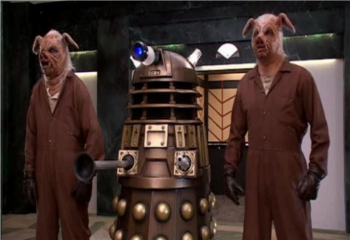 PIIIIIIIIIIGS IN MANHATTAAAAAAAAN!
Foreman: These new bosses, who are they?
Diagoras: I think you can say they're from outta town.
Foreman: Italians?
Diagoras: Bit further than that.
Foreman: How far?
Diagoras: Beyond your imagination.
Advertisement:

The one with an uppity showgirl whose boyfriend is a literal pig. Not to be confused with a Spiderpig.

The episode begins with an aerial shot of 1930 New York City that zooms in on a local revue. Showgirls prepare for a performance while the star, Tallulah, makes out in her dressing room with her boyfriend Laszlo, one of the stagehands. As she heads out to the stage, Laszlo hears oinking noises from down the corridor, luring him into a dark storeroom. He's ambushed by a pigman and the opening title rolls.

The TARDIS materialises beneath the Statue of Liberty. The Doctor and Martha walk out and take in the view of Manhattan, and Martha notes that the Empire State Building is still a work in progress. They find a newspaper and identify the date as November 1st, 1930. The front cover also describes people going missing in the local Hooverville, leading the Doctor to investigate. Arriving in Central Park's Hooverville, the Doctor and Martha come across two people fighting over a loaf of bread. The fight is broken up by Solomon, the leader of the village. As if the symbolism wasn't obvious enough, he breaks the loaf in half and divides it among the two people. The Doctor and Martha introduce themselves to Solomon, who describes the plight of the people there in Hooverville.

On the Empire State Building, construction is being managed by Mr. Diagoras, a harsh and unforgiving boss who demands that his workers go faster per the wishes of his new masters, despite the fact that they're on schedule and utterly exhausted. After a foreman protests that the men won't be able to meet his unrealistic deadlines and threatens a work stoppage, Diagoras directs him toward his masters from "out of town": Dalek Caan, flanked by two pig-slaves. Diagoras explains how the worker is refusing to work any faster, causing Caan to order him taken away for "the Final Experiment" by the pigs.

As the worker is taken downstairs by the pigs, Dalek Caan speaks with Diagoras and tells him that the Empire State Building must be completed in time for the "Gamma Strike".

In Hooverville, the Doctor asks Solomon about the disappearing people mentioned in the newspaper; he explains how people disappear during the night and that the police aren't interested as it's just homeless people. Mr. Diagoras arrives in the village and offers $1 a day for a job that involves clearing out a collapsed tunnel in the sewers. The Doctor, suspecting something is up, volunteers, causing Martha, Solomon and a kid named Frank to do so as well.

Whilst exploring the sewers, Solomon explains to the Doctor how Diagoras was just another foreman until a couple of months ago, when he suddenly went from Rags to Riches overnight. As they speak, the Doctor comes across a green blob on the ground. He takes a look, and Martha, asked for her opinion, notes that it isn't human in origin. The Doctor then realises that the group has gone more than a mile into the sewer already and there's no sign of any collapsed tunnel.

The scene cuts back to the construction site in the Empire State Building, where Mr. Diagoras tells his workers that they are to attach three panels, pieces of Dalek casing, to the mast of the building. Again, he demands that they work unreasonably fast. The workers say that they can't work at night for fear of losing their grip from the cold and falling to their deaths, but Diagoras simply threatens to fire and replace them if they refuse. After the workers have climbed up to fasten the panels to the mast, Dalek Caan returns to speak with Diagoras. Diagoras reassures Dalek Caan that the mast will be finished on schedule. As the two look out at Manhattan, Dalek Caan muses that, despite its perceived weakness, humanity has succeeded in building so much. After Dalek Caan mentions losing its planet in a great war, Diagoras says he is a war veteran himself, how he swore he would survive, no matter what, and that he would claim the city no matter what it takes.

"You think like a Dalek!" is the response of Dalek Caan. The scene cuts down to a laboratory in the basement, attended by pig-slaves working for the Cult of Skaro, who have arrived in 1930s New York after escaping via Emergency Temporal Shift during the Battle of Canary Wharf. Dalek Sec orders Dalek Caan to bring Diagoras down to the basement. There, Diagoras attempts to thank Dalek Sec, but Sec orders him to cease talking and has the pig-slaves take him away as he protests that he's on their side.

The Doctor, Martha, Solomon and Frank continue their search until they find a pigman sitting in a corner sadly. The Doctor promises to help him, but more violent pig-slaves chase them to the surface, all but Frank making it. They emerge from a manhole in the revue theatre, where Tallulah holds them at gunpoint. But surprise, it's just a prop, and after she explains that Laszlo is one of the people who've disappeared. The Doctor rigs a DNA scanner for the green blob, Solomon goes back to Hooverville to organize a militia and Tallulah and Martha engage in girl talk. Martha reveals that she's attracted to the Doctor, while Tallulah holds out hope that Laszlo is still alive, since he left a rose for her on her dressing table every night, and the roses are continuing to show up.

Finally we get back to the Daleks. Dalek Sec wants to combine his and Diagoras' DNA as part of the Final Experiment. The others protest this since humans are impure, but Sec points out that for all their impurity, there are millions of humans and only four Daleks left in existence. Dalek Sec's metal exterior opens up, and he absorbs a screaming Diagoras.

To his horror, the Doctor finds that the DNA from the blob is Dalek. As Tallulah goes on stage, Martha sees a pig-slave watching the performance from the shadows. She chases after it, but a different pig-slave captures her, so the Doctor and Tallulah chase her into the sewers. They find the pig-slave who was watching Tallulah. It's Laszlo, horribly mutilated but still of his right mind, having managed to escape before the Daleks could finish converting him. Doctor and friends spy on the Daleks, who separate Martha and the other prisoners: the less intelligent ones become pig-slaves, smart ones are sent to the lab. Laszlo, concerned for her safety, tells Tallulah to go home, then he and the Doctor slip in line behind Martha unnoticed. Once in the lab, they witness the results of the Final Experiment: Dalek Sec has become a Dalek-Human hybrid. A new life form is born. To Be Continued...