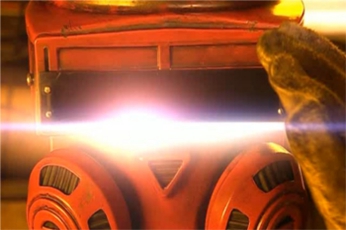 A.k.a. "Here Comes the Sun"
"Burn with me."
Advertisement:

The one that is self-aware of the episode runtime.

The Doctor and Martha land the TARDIS aboard a spaceship, only to have the room they landed in rise to unbearable temperatures, trapping them aboard the ship, which is being pulled into a nearby sun. Martha and the Doctor have only forty-two minutes to save the ship, the crew and themselves. Meanwhile, a member of the crew has contracted a mysterious illness. His body temperature rises to an impossible height just before he opens his burning-white eyes and absolutely fries a fellow crew member to a scorch mark on the wall.

The only way to save the ship is to pass through a security system, which the crew inconveniently programmed while they were drunk, and decided that it would be a good idea to make it a series of obscure trivia questions. It's like the Pub Quiz from Hell. Martha phones her mum, her own Voice with an Internet Connection, and gets some answers... unaware that Mrs. Jones' phone is being tapped by the mysterious people from "The Lazarus Experiment", the ones with sinister music cues; they are revealed to be government agents working for Mr. Saxon.

The Doctor dons a familiar orange spacesuit and saves Martha's ass, but as he's clinging to the side of the spaceship he gets a very clear view of the sun — and the sun gets a very clear view of him. Apparently the sun is alive, and it's angry. The Doctor, succumbing to the same possession by the sun that claimed the other two crew members, reveals that the only way the sun will let them go is if they return the stolen sun particles the ship has been using for fuel. Martha takes care of it and saves the day, because the Doctor's a bit preoccupied with going batshit insane.