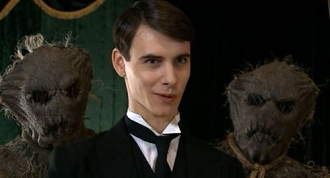 The one where a man learns he doesn't exist, and the man he truly is decides to stop being kind.

Mild-mannered Edwardian schoolteacher John Smith is baffled when alien monsters turn up and demand that he turn himself into "The Doctor". But the strangeness is jogging memories deep inside him, memories of a life he's sure he never lived but only dreamed, and more and more fragments of his dreams are turning out to be real. Deny it he tries, but eventually John has to consider the possibility that Martha and the aliens are telling the truth: "the Doctor", his dream-self, is the reality, and John Smith is the fabrication.

Still frightened and confused, John quizzes Martha on the Doctor, and is horrified by her description: a tremendously lonely alien, the sole survivor of the universe's greatest holocaust, as remote and inhuman as a force of nature, who — for all his careful planning — never even considered that he might fall in love while hiding among humans.

Timothy asks how it's possible that he himself can learn things from John's watch and even see the future sometimes. With John now holding the watch that contains his Time Lord self, the Doctor's Motor Mouth starts automatically explaining how it's just a "low-level telepathic field" (which will become important later). "You were born with it, just an extra-synaptic engram causing–"

"–Is that how he talks?" John asks in utter horror, realizing fully that this Doctor is real, and inside him, and that he needs to make the most horrible decision of his life.

John would give anything to stay human and marry Joan. While spending his last evening with her, he even has a brief vision of that future: a long and happy life and a peaceful death, secure in the knowledge that everyone he loves is safe. But even that future is illusory, as the aliens are closing in on John and will spread destruction across the galaxy if they win. John must sacrifice himself and become the Doctor, though he doesn't even know if any fragment of his identity will survive.

With the help of Joan, John eventually makes the decision to open the watch, essentially commit suicide and become the Doctor again. He defeats the aliens without much effort, and as punishment for what they've done, traps them in different time event horizons... for all eternity. The creatures realize that the Doctor wasn't simply escaping from them – he was being kind to them, in giving them a chance to die without ever encountering him.

The Doctor returns for Joan. She's horrified to see him, even though he tells her that John is part of him now, somewhere deep inside him. He invites her to join the TARDIS and asks if she would like to start over. She refuses, both disgusted and heartbroken at his antics. Decades into the future, Martha and the Doctor visit Timothy, now a war veteran, and give him some closure.

Not much later, the Gallifreyan technique to hide in human form will become important again. Much later, though...

The Family of Blood

The Family of Blood wanted to live forever...so the Doctor made sure that they did.

Alternative Title(s): Doctor Who NSS 3 E 9 The Family Of Blood

The Family of Blood

The Family of Blood wanted to live forever...so the Doctor made sure that they did.