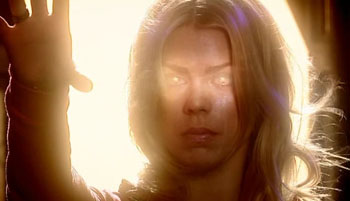 Because paradoxes are fun!
Emperor Dalek: You cannot hurt me. I am immortal.
Bad Wolf: You are tiny. I can see the whole of time and space, every single atom of your existence. And I divide them.

The one where we say adieu to someone fantastic only 13 episodes into the new series.

When we left our heroes, they were staring down an absolutely ridiculous number of Daleks. Who, in a twist that was done roughly 20 years before, turn out to be mutated humans, trapped in their pepperpots forever.

The Doctor and Jack rig a force field out of Margaret the Slitheen's surfboard, and go fetch Rose.note The episode also reveals that the TARDIS survived the entire Time War without a single shield as the Dalek confirms that Rose is "correct" when she says they'll destroy the TARDIS as it has no defences. Jack tenderly kisses Rose and the Doctor goodbye on their lips, and goes off to stall the Daleks, knowing that he probably won't survive. note This is the first time that the Doctor's kissed a guy on screen. In the Eighth Doctor Adventures novels, the Doctor happily snogged his male companion Fitz (who had a crush on him) years earlier. The Doctor tricks Rose into going back into the TARDIS and sends her back to her own time to keep her safe. He activates a hologram recording that tells Rose to live a normal life, let the TARDIS die and experience all she can as a normal human girl.

Rose won't have any of it and, looking for a way back, notices the words "Bad Wolf" everywhere around her in cloudy grey London. For the first time, she realizes that it may not be a warning at all... it may be an inspiration. She talks Mickey and Jackie into helping her rip apart the heart of the TARDIS using the hook of a heavy duty tow truck to expose the ship's living telepathic core to her. While the TARDIS is incredibly temperamental, this time she and Rose want the same thing — to get back to the Doctor — so off goes the TARDIS, with Rose inside, in a flash of white light.

The Daleks approach the comms centre of the satellite as the Doctor is still preparing his wave attack, and they EX-TER-MI-NATE anyone they encounter — including Lynda and Jack. The Dalek Emperor tells the Doctor to make his choice. Will he be a killer like he was in the Time War, murdering every last human on Earth to destroy the Daleks? Or will he be a coward and let nature take its course? The Doctor realizes that he can't bear to repeat the actions he took during the Time War, and says that he'd be a coward, any day. Even if it means letting those mutated humans live on as Daleks forever. Even if it means he'll have to sacrifice himself.

Just as he's about to be murdered, Rose... no, sorry, Bad Wolf steps in, with time itself pulsing through her from the TARDIS core. As a catalyst for the Time Vortex, she's become a literal goddess from the machine, and with a single word she promptly kills every last Dalek she can find. On top of that, she scatters her name — and the name of the TV station — throughout time, space and parallel dimensions, as a sign to herself. Oh, and she revives Jack.

With all that, she collapses, and the Doctor, grinning, tells her... "I think you need a Doctor". He absorbs the full force of the Time Vortex from Rose's body by kissing her. It's a beautiful moment until it kills him. He blows the essence of the Heart back into the TARDIS, and then takes flight... without Jack. Jack hears the sound of the TARDIS as it vanishes, leaving the poor guy stranded in 200,100... From here he'll go on to star in Torchwood.

Rose wakes up unharmed from her ordeal, with some memories jumbled. However, Nine is starting to show an ominous glowing in his hand, and we realize something's wrong. He tells Rose that he had so many plans for her, like taking her to Barcelona. Not the Spanish city, but a planet of the same name where a breed of noseless dogs lives. Except that jolly rambling is interrupted by a jolt of hissing yellow energy thrashing inside of his chest. Though the Doctor's saved Rose, the Time Vortex energy he absorbed turned corrosive and it's making all his cells die. Fortunately, the Time Lords have a neat little trick, a way to cheat death. The downside? He has to change into a new man to live on. Knowing he's going to lose the aspects of this incarnation, the Ninth Doctor smiles at Rose as he bids her goodbye, telling her that she was "Fantastic... Absolutely fantastic! And you know what? So was I!" The Doctor is consumed with a burst of flaming energy and regenerates into a new form, portrayed by David Tennant. The new Doctor tries to awkwardly introduce himself to a confused Rose, but interrupts himself when he realizes that he has brand new teeth, finding the sensation "weird". He takes a moment to try and remember what he was talking about, before realizing, "Oh, that's right! Barcelona."

"Rose, before I go, I just want to tell you, you were fantastic. Absolutely fantastic. And do you know what? So was I!''

Alternative Title(s): Doctor Who NSS 1 E 13 The Parting Of The Ways