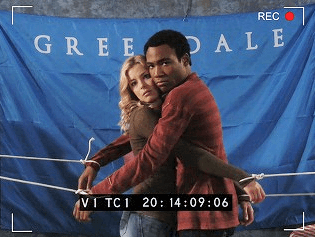 "You can't even do it when we're helping you!?"
Advertisement:

Two characters open their arms. They lean in and... fake to the left, flinch backwards, bump arms, cringe, and back away.

Sometimes, hugs are psychologically helpful, natural, heartwarming or at very least, cathartic. Other times, the chemistry's off, elbows keep bumping, or both participants instantly want to back out. Can be used to to highlight a complete lack of sexual tension, relationship problems, embarrassment, intimacy issues, any number of things, really. The important part is that the hug is incredibly awkward. This does not indicate that the characters are not emotionally close—frequently, examples of this trope occur between two people who just hate physical closeness.

The characters may actually succeed in wrapping their arms around one another, but immediately break apart from acute embarrassment.

Sister trope to Greeting Gesture Confusion, in which two characters misjudge the correct gesture to use when meeting one another. Can overlap with Man Hug, where men develop a special way of hugging to keep this from happening out of embarrassment. Also see Air Hugging. Maybe the natural result if No Hugging, No Kissing is violated. For the hug that becomes awkward because of how long it goes on, see Overly Long Hug.