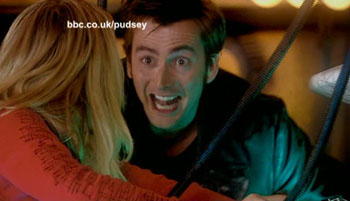 Rose cannot fathom why her big-eared Northerner Doctor is now a skinny motormouth leaping around like a toddler hopped up on too many Skittles.note She's quickly come to know that this is actually what the Doctor is like because he's actually nuts underneath that prickly, aged, wise exterior.
"And we never stopped, did we? All across the universe. Running, running, running... one time we had to hop. Do you remember? Hopping for our lives. Yeah? All that hopping? Remember hopping for your life?"
— The Doctor
Advertisement:

The one where we get newly acquainted to Doctor number Ten.

Very short scene, bridging "The Parting of the Ways" with "The Christmas Invasion", in support of The BBC's Children in Need telethon. The only legal release in the US was on the DVD release of that season, but it's just short enough to be perused by other means…

The Ninth Doctor's regeneration happens in a flash of light, revealing a new man — the Tenth Doctor. Rose watches with surprise and fear as this new man continues about as though nothing happened — babbling about Barcelona, and teeth, and that new mole he has, and a slight weakness in the dorsal tubercle of his right wrist. Oh, and sideburns!

"Who are you?" Rose asks, and the Doctor begins to realise maybe he should have explained this whole regeneration thing earlier. He begins to try and assure his companion that it really is him, but Rose isn't fooled. She's seen aliens, and there are hundreds of explanations for what happened — body swaps and transmats, or maybe a Slitheen in a human suit.

Finally the Doctor manages to convince Rose that he's still the Doctor, by telling her the first words he ever spoke to her: "Run." Happy with his breakthrough, he excitedly starts reminiscing at length about their other adventures together, but he quickly calms down as he notices that Rose is still afraid of him. Rose then asks him if it is possible for him to change back but, saddened, the Doctor tells her that he can't, and asks her if she wants to leave him.

Rose still has a hard time digesting everything that just happened, and hesitantly asks the Doctor if he wants her to leave. He quickly says that he doesn't, but tells her that if she wants to go home, it is her decision. He wisely decides that the trip to Barcelona can probably wait for another day, and plots a course for Rose's home instead, setting the TARDIS to arrive on Christmas Eve.

Rose asks the Doctor if she is going home, and he answers that it will be up to her, before managing to crack a joke about Jackie's cooking that will be waiting for Rose back in London. Rose can't help but smirk a little at this, and the Doctor is happy to see her smile again, but just as it seems the two are beginning to bond again, the Doctor suddenly starts having several seizures. He mutters a quick "Uh, oh" as he realizes that he is probably going to suffer through yet another problematic post-regeneration process.

The TARDIS starts to respond to the Doctor's seizures, as bursts of glowing energy start flowing from his mouth. Rose asks if they should go back and get help from Jack, but the Doctor, becoming increasingly maniacal and mentally unstable between his seizures, denies the notion, saying that Jack is probably too busy rebuilding the future Earth, before he excitedly turns toward the TARDIS' control panel and declares his intention to break the time limit as he turns the throttle way up. Rose desperately shouts for him to stop, but he just responds with mad laughter, as he shouts: "Here we go! Christmas Eve!"