You Are What You Hate 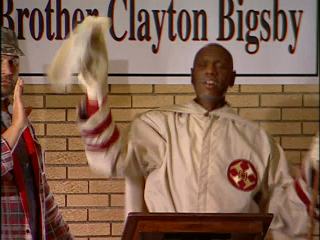 Appointing a blind man as their leader might not have been the Klan's best moment.
"If you hate a person, you hate something in him that is part of yourself. What isn't part of ourselves doesn't disturb us."
— Hermann Hesse, Demian
Advertisement:

This is the implication that a character who dislikes a particular thing is secretly a practitioner of that thing.

This especially comes into play when ethnicity or homosexuality is involved. Such a character is likely to believe in negative stereotypes about his own group (no matter how irrational), and hate himself for it, or live by those stereotypes so they become self-fulfilling prophecies. If Fantastic Racism is in play, such as with Differently Powered Individuals, the person may try to suppress the trait that makes them part of the hated group or use their power as a weapon against them.

In older works, this sometimes comes up with racist characters who are exposed as being light-skinned African-Americans who are "passing". Depending on the time frame of the media, the result may be either to show that the character should love himself or, in very old media from before 1940 or so, to show that the character is a sneaky liar who wasn't ethical enough to accept his "natural" place in the order of things.

This sort of implication is "non-falsifiable": If even denial is taken as proof, there's no way to prove innocence. Characters who don't actually fall under this trope, but are accused of it by other characters, may get increasingly angry (or despondent) about no one believing them.

This trope comes in several flavors.

When the character is openly a member of the group he despises, then that's a Boomerang Bigot. It is possible for the two to overlap. A bigot's membership in the hated group might be secret to most people but known to a few. If he continues to sincerely express hatred towards the group, even when in a situation where his secret will not be exposed, then he might show shades of both this trope and Boomerang Bigot.

Often a cause of Unfortunate Implications. See also Hypocritical Humor, Psychological Projection, He Who Fights Monsters, Karmic Transformation, Cultural Cringe, I Do Not Like Green Eggs and Ham, and The Horseshoe Effect. Contrast Pretend Prejudice (in which a person pretends to hate a group but secretly likes or tolerates them), Hunter of His Own Kind (which usually involves Half Human Hybrids) and Color Me Black (where a bigot is forcibly turned into a member of the group they hate, usually by supernatural means). Armoured Closet Gay is one common Sub-Trope. If the hater doesn't realize that they're a member of the group they hate, they might just be a Tomato in the Mirror. See also Stop Being Stereotypical in which a person doesn't hate his group, but is embarrassed by the behavior of some members.