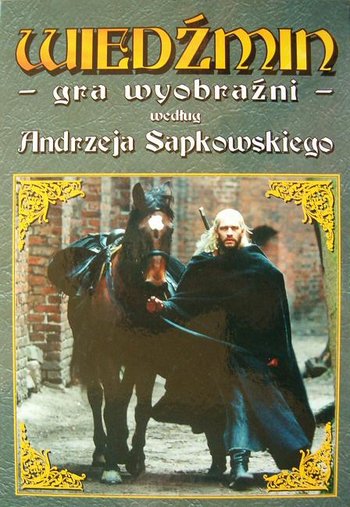 The Witcher: Game of Imagination (Polish Wiedźmin: Gra Wyobraźni) is a Polish Tabletop RPG set in the Witcher universe and released in 2001.
Advertisement:

During the late 90's, there was some real hype around The Witcher in Poland. The last part of the saga was released and the author had a deal for a TV series and a film. In addition, there was a small project to create a tabletop RPG game based on the saga. The tabletop game was the only one of the three to find success.

There was no real competition for the game on the Polish market during that time, as it was the first Polish system to combine a few key elements: it was based on an established media property, it had its own unique mechanics, it had a fantasy setting, and it was helped by hype (as it was faithful to the source material). Its rules and mechanics are also extremely simple and user-friendly, at least when compared with everything else on the contemporary Polish market - it's entirely possible to explain them to a layman in five minutes.

The mechanics are based on d6 and derived from it d3 and d2. There are nine stats divided into two sections: six physical (Constitution, Movement, Strength, Perception, Dexterity, and Agility) and three more or less mental (Intellect, Will and Savoir-vivre, the last being a combination of generic Charisma and overall presentation). Each statistic (except Movement) has certain skills attached to it, like Alchemy and Economics being listed under Intellect or Acrobatics being listed under Agility. Both stats and skills range from 1 to 5 (skills can also be at 0). The higher the stat, the more d6 you use, e.g. 3 Strength means you grab 3d6 for rolls based on it.

All tests go by the same rule - certain actions have either a set difficulty or a difficulty which is derived from certain parameters. The difficulty ranges from 0 ("no sweat") to 9 ("heroic deed"). Skills lower the difficulty by themselves, e.g. the difficulty of opening a basic lock is 4 and if your character has Cracking at 3 the final difficulty is 1. Then you take the amount of d6 equal to your tested stat (so in case of mentioned Cracking you take d6 equal to your Dexterity) and you must roll a number of successes equal or higher to the difficulty. Success is any outcome higher than 3 on any given dice. This makes for the unintended effect of having high stats matter less - while a high stat makes a success more likely, the higher-difficulty actions scale together with stats or even faster.

Certain stats are calculated into sub-stats, like Constitution determining Hit Points, or Strength how much your character can actually carry.

These simplistic mechanics, while often criticized by D&D players, were intentional. As the title implies, it is a game of imagination, putting heavy emphasis on story-telling and pure fun, while both the sourcebooks and later additions heavily discourage using mechanics as the sole way of controlling and judging players actions. Also, the GM is called the "story-teller" (bajarz in Polish), to put further emphasis on story instead of dice rolls.

And even in combat, the mechanics are still dynamic and fast-paced. Aside from regular attacks, players can use called attacks targeting certain body parts (with increased difficulty) or use special combat maneuvers... if the character knows any. It also happens to be one of the few tabletop RPGs, where even a small skill increase makes your character very visibly stronger in said field, as higher skills means lower difficulty and thus more successes during throws, which can lead to (much) higher damage, lower mana use, or automatic successes in trivial tasks.

There are no levels, so the game is basically based on very slow and hard-to-do Stat Grinding. Why is it hard? Thanks to its mechanics, even the strongest character can die after 3 to 4 hits from regular thugs (while being able to kill them in one, which is the trademark of witchers and well-trained rangers), not to mention monsters, powerful magicians and angry mobs. The game designers have taken a lot of pride and pleasure from such balance in fighting mechanics. And to grind your skills and stats you use your Points of Proficiency, which are a mix between Experience Points and Skill Points.

There are also no classes nor premade professions, but each race gets certain starting skills (and most of them repeat, since everyone has some basic knowledge about fist fighting or talking) and most of the races have minimal, maximal, or both kinds of caps on their stats, except for humans.

The game was first released as a "demo" pocket edition. Being a teaser, it only covers the bare basics of the mechanics and contains a simple example scenario. Then the actual source book arrived, giving detailed descriptions of mechanics, expanded combat maneuvers, a spell and prayers book, massive chapters full of information about the setting, a monster book, and a hefty chapter full of advice for story-tellers. Later, two expansions were released: the first was a description of Nilfgaard and a supplement to the basic rules (covering art of Min-Maxing, new fighting moves, and a new kind of magic based on Psychic Powers), and the second was premade scenario for a Cloak and Dagger campaign with only minor tweaks in the mechanics.

After those, a short-lived periodical called "White Wolf" was released. In fact, the whole "periodical" part was a marketing campaign to bring more attention towards the system. "White Wolf" lasted only three issues: one covering dryads and Brokilon, their forest, one about Novigrad, and one about spies, secret agencies, and diplomats. It was never clearly stated if "White Wolf" was canceled because the authors run out of ideas, or because MAG Publishing House, responsible for the whole system, was facing financial problems and was slowly leaving the RPG business. Aside from all those direct expansions, the magazine "Sword and Sorcery" - also owned by MAG - was printing articles even further expanding the game setting, giving handfuls of advice for story-tellers, and providing a few scenarios.

There was also a semi-official expansion, which covered the world a century before the Witcher's Saga, as a tie-in to a short story about Geralt's parents. It was intended to be officially published, but after cancellation, it ended up being released for free by its author.

Not to be confused with R. Talsorian Games Fuzion RPG, The Witcher Role Playing Game.