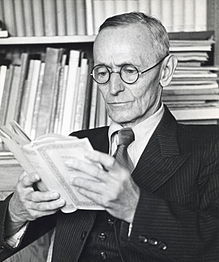 Hermann Karl Hesse (2 July 1877 – 9 August 1962) was a German Nobel Prize winning author. His works were extremely popular in the 1960s, to the extent of being called the "Hesse Torrent." He received the Nobel Prize in 1946 for The Glass Bead Game. His books are often metaphysical in nature and deal with a search for self-knowledge and understanding, especially where faith is concerned.