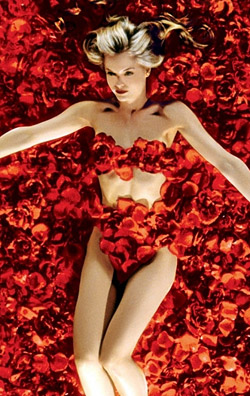 As to the plot, the opening narration tells it all:

"My name is Lester Burnham. This is my neighborhood; this is my street; this is my life. I am 42 years old; in less than a year, I'll be dead. Of course, I don't know that yet. And, in a way, I'm dead already."

The characters in the film:

Almost none of these characters are who they appear to be. The Burnhams evolve, spiraling in and out of happiness as the film progresses, while others are simply turned around on a single Wham Line.

Notable for being a dark, cynical, and dead-funny look at modern suburbia, possibly encouraging the later trend of arty/angsty, relatively-obscure dramas getting all the Best Picture nods. It's also notable for juggling a ton of characters, successfully, where most films top out at three or four.