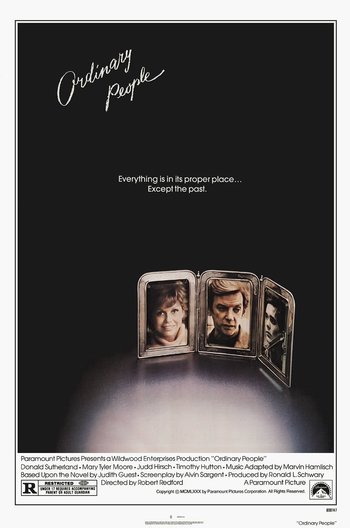 "They are Ordinary People. And they are coming apart."
—Tagline of the novel
Advertisement:

A 1976 novel by Judith Guest, Ordinary People was brought to the screen in 1980 as the directorial debut of Robert Redford. The film stars Donald Sutherland, Mary Tyler Moore, Judd Hirsch, and Timothy Hutton.

The story centers around the upper-middle-class Jarrett family of Lake Forest, Illinois: father Calvin (Sutherland), mother Beth (Moore), and teenaged son Conrad (Hutton). Prior to the events of the story elder son Buck was killed in a freak sailing accident, and Conrad — who was with Buck when he died — was committed to a mental hospital for four months after attempting suicide out of grief. Now he's been released, and we see the ways that the continuing fallout from Buck's death has affected the family. It's not pretty. While Calvin and Beth confront their own issues, psychiatrist Dr. Berger (Hirsch) tries to coax Conrad out of the emotional shell he's built around himself.

The film won four Academy Awards, including Best Picture (for which it famously beat out Raging Bull), Director (Redford), Adapted Screenplay (Alvin Sargent), and Supporting Actor (Hutton). Moore and Hirsch were also nominated for their performances. The cast also includes M. Emmet Walsh as Conrad's swim-team coach; Elizabeth McGovern as Jeannine, a classmate whom he begins dating; Fredric Lehne as Lazenby, a friend since childhood from whom he has been pulling away since the accident; and Dinah Manoff as Karen, a fellow patient he befriended at the hospital.

Not to be confused with non-magical people, or with Normal People.