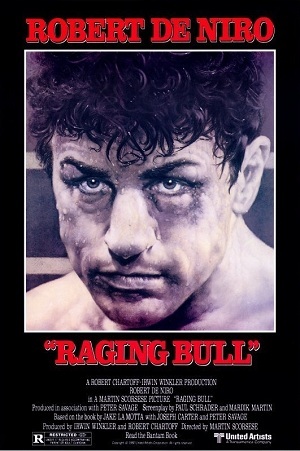 Original theatrical poster by Tom Jung
Jake LaMotta: Come on, hit me. Harder. Harder.
Joey LaMotta: What the fuck do you want? That's hard. What are you trying to prove?
Advertisement:

Raging Bull is a 1980 film, directed by Martin Scorsese and starring Robert De Niro. It revolves around middleweight boxer Jake LaMotta (De Niro), a man who is consumed by his anger, paranoia, and shame.

The film begins in 1964, as we see an overweight, aging LaMotta, now a comedian, practicing his routine. The scene then changes to 1941, as LaMotta boxes and throws his fights at the behest of the mafia. His brother and manager, Joey LaMotta (Joe Pesci), does his best to support Jake and get him a chance at success. At the same time, Jake seduces Vikki, a 15-year-old girl he met at a Bronx public pool.

While he catches a break and wins a string of victories, LaMotta becomes increasingly paranoid that Vikki is cheating on him, and becomes more and more abusive. The rest of the film details the aftermath in the following years after LaMotta has retired, as he spirals downward ever further.

The boxing fights themselves are notable for their cinematography. Run entirely on the Rule of Drama, they look nothing like actual bouts. One Fight Unscene consists of two still frames: LaMotta with his fist drawn back, and him standing triumphant over his downed opponent. Additionally, sponges filled with fake blood were inserted into the boxing gloves, spraying the fighters and the ropes with amounts of fluid previously unseen in a sports movie.

While critical reception was mixed at the time of its release, and it was passed up for Best Picture and Best Director at the Oscars in favor of Ordinary People, Raging Bull has since become a critical favorite, and is regularly regarded as one of Scorsese's crowning achievements and one of the best movies of all time. It won De Niro his second Oscar (this time for Best Actor, following his Best Supporting Actor win for The Godfather Part II), and his performance is frequently cited as one of the greatest in the history of cinema.

A sequel was long in Development Hell (with LaMotta's involvement), but eventually under the threat of a lawsuit from MGM, the title was changed from Raging Bull II to The Bronx Bull in order to disassociate itself from the original. The film stars William Forsythe as the older Jake LaMotta, Morjean Aria as a young LaMotta, and has a supporting cast including the likes of Joe Mantegna, Tom Sizemore, Penelope Anne Miller, Natasha Henstridge, Alicia Witt, Ray Wise, and James Russo.