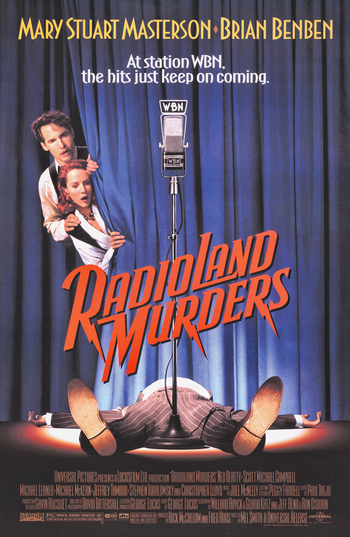 At WBN, "dead air" is about to take on a whole new meaning...
Advertisement:

Radioland Murders is a 1994 comedy-mystery produced by George Lucas and directed by Mel Smith. The script was written by Willard Huyck, Gloria Katz, Jeff Reno and Ron Osborn.

Chicago, 1939: It's the inaugural night for radio station WBN, and things absolutely must go as planned. The largest investor is threatening to pull his support, and a lot of others are threatening to follow suit. And what's worse, he wants half the scripts changed, even though the writers have gone on strike since they haven't been paid in weeks.

Enter Roger Henderson (Brian Benben), the lead writer, and his wife Penny (Mary Stuart Masterson), who is seeking to divorce him. Both are just trying to make sure everything goes well, but darn it, someone keeps killing people. And wouldn't you know it, Roger always manages to be the first on the scene of the crime.

So while Penny tries to keep things from falling apart backstage, Roger has to clear his name, while running from the cops and single-handedly re-writing all of the scripts.

The Radioland Murders was Gloria Katz's final film as a screenwriter before she died of ovarian cancer in 2018.