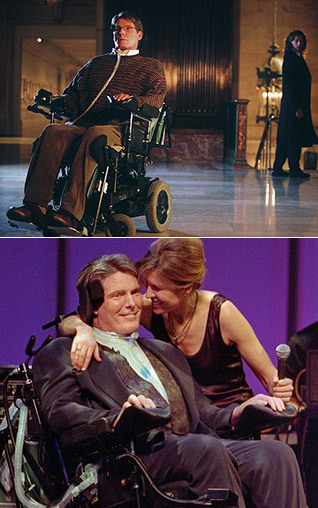 Christopher Reeve in Smallville (top) and in real life (bottom).
"We always had a deaf character in the script, but John [Krasinski] really pushed for them to hire Millicent [Simmonds]. She came to set and taught everyone sign language. It was really amazing and brought an extra depth to the film."
— Scott Beck on casting for A Quiet Place
Advertisement:

This is about when a disabled person is cast for a role that has the same disability, rather than an able-bodied performer. For a long time in film, theater, and television, when a work called for a character with a disability, it was the norm to cast perfectly able-bodied actors in those roles, especially if the role was one of the leads (you still want to cast a big name star in the lead role, despite the character's disability, after all).

It was so much the norm that casting disabled actors as disabled characters has only become more commonplace since the late 1980s, though normally such actors are in supporting or background roles. Disability activists in recent years have become more insistent on the importance of this kind of casting, pointing out how difficult it is for disabled actors to get roles at all, let alone when specifically disabled roles are being filled by able-bodied actors.

While accommodations can be made, there are production and safety concerns where a non-disabled actor in such a role is justified. For example:

Related to Cast the Expert. See Written-In Infirmity for cases where a performer became disabled during the run of a show and this was acknowledged in-universe, and Queer Character, Queer Actor for the LGBT Sister Trope.