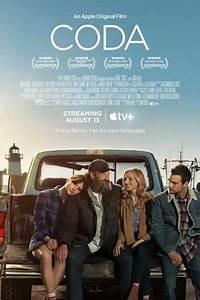 CODA is about the hearing daughter Ruby (Emilia Jones) of deaf adults (hence CODA), her former beauty queen mother Jackie (Marlee Matlin) and her fisherman father Frank (Troy Kotsur). As their business is threatened, Ruby joins glee club run by the kind but firm Bernardo Villalobos (Eugenio Derbez), who discovers her talent for music and encourages her to go to musical school, away from her beloved family.
Advertisement:

At least half the film dialogue is in American Sign Language, due to much of the cast being Deaf. Ruby, who is the titular CODA (child of deaf adults) also knows ASL fluently, translating for her parents and brother, who are Deaf.

An American remake of the 2014 French film La Famille Bélier, CODA premiered at Sundance in 2021, before being purchased by Apple TV+ and premiering in August 2021.