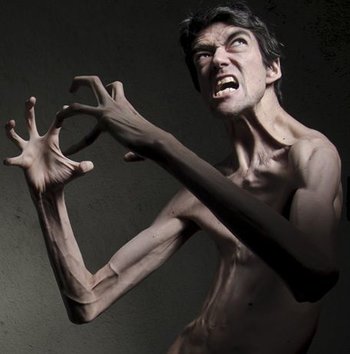 Javier Botet López (born July 30, 1977 in Ciudad Real, Spain) is a Spanish actor who you may have seen before if you're a fan of horror films, even if you don't recognize his face. Think of him as the Spanish Doug Jones; a performer who uses his physical attributes to play monsters under heavy makeup, although in his case, his physical appearance is the result of Marfan syndrome.

He first came to attention in his home country for his role as Niña Medeiros in the [REC] film series, appearing in the first three installments. His debut in the United States was also as a female monster - the title character of Mama. Since then, he's appeared in horror films such as The Conjuring II, The Mummy, and Scary Stories to Tell in the Dark. He's also portrayed Slender Man in the eponymous film and forms of the titular monster in It and its sequel, reuniting him with Mama director Andrés Muschietti.