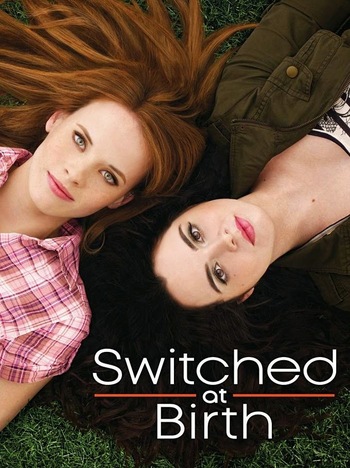 ABC Family Teen Drama about two 16-year-old girls who were switched at birth.

Bay was raised in a Big Fancy House by the wealthy John and Kathryn Kennish. Daphne, who went deaf after catching meningitis as a toddler, was raised by single mother Regina Vasquez in a tough neighborhood. Neither girl knew that they weren't biologically related to their families, and in fact didn't know about each other, until Bay requested a DNA test. Once the secret is out, the Kennishes invite the Vasquezes to move in, and the two families start to get to know their biological daughters. In addition, we have generalized family drama in the form of boy problems, the growing pains of the elder Kennish sibling Toby, and various personality conflicts between the parents. The show debuted in 2011 and ran for 5 seasons until concluding in 2017.