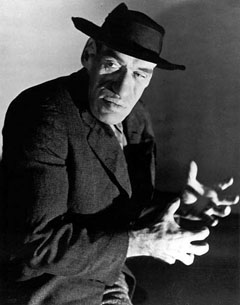 He'd always have his Hatton.
Advertisement:

His striking physical features were caused by a growth hormone disorder called acromegaly, which was also known to affect the late André the Giant and Richard Kiel (though it didn't make Hatton as tall as them, since he developed the condition after reaching his full adult height of 5'9").

Hatton was born in Hagerstown, Maryland to a pair of schoolteachers and moved to Tampa, Florida in his teens. A popular athlete and student, he played high school football; attending the University of Florida, he briefly played quarterback for the Florida Gators. Hatton served in World War I and began to develop symptoms of acromegaly soon after leaving the service. Studio publicity would later claim Hatton's condition resulted from poison gas, but this is medically implausible as adult-onset acromegaly is caused by a tumor on the pituitary gland.

Hatton returned to Tampa after the war, working initially as a high school football coach and freelance writer. As his symptoms worsened, he underwent several painful surgeries in an attempt to arrest his condition's spread (notably, he had metal implants placed in his cheeks, which contributed to his signature appearance and speech patterns) and battled depression and social anxiety. Hatton lost most of his money in a failed real estate deal, which also caused the break-up of his first marriage. By the end of the decade, however, Hatton found steady work as a sportswriter and reporter for the Tampa Herald, his unique appearance and amiable personality making him a well-known fixture in the local social scene.

It was in this capacity that Hatton, in 1930, met film director Henry King while the latter was shooting Hell's Harbor in Tampa. Hatton interviewed King at a press conference; King was struck by the reporter's appearance and offered him a bit part in the movie. Hatton obliged, but declined King's offer to move to Hollywood and act full-time. Like many sufferers of acromegaly, however, Hatton eventually developed severe arthritis which made it difficult for him to walk or stand for long periods of time. When he was no longer able to work as a reporter, Hatton's second wife, Mae, convinced him to relocate to California and pursue acting full-time.

Due to his condition, he'd usually play a thug of some kind. He occasionally appeared in more substantial parts, like a member of the lynch mob in The Ox-Bow Incident, in an attempt to show he possessed range outside of minor horror roles. This led to his role as the backbreaking murderer known as "The Creeper", who appeared in three Universal films late to his career, which cemented his status as a cult actor. Hatton died of a heart attack soon after finishing the last of these films, The Brute Man, at age 51.

by filmmaker Joe O'Connell as "a really normal guy who was weird looking." Hatton was known as a hard-working Nice Guy who made friends easily - he was rumored to be a ladies' man in his younger days - and was Happily Married to his wife Mae from 1934 to 1946. He gained a wide fanbase by making himself accessible to the public: he corresponded regularly with his fans, especially children, and he and his wife would occasionally even entertain Hatton's fans at their home in Beverly Hills. Hatton also engaged in philanthropic efforts; among other causes, he organized fundraisers for disabled war veterans and volunteered at hospitals in L.A. to entertain patients.

Despite his relatively short career, Hatton's appearance and unique screen presence has ensured his continued popularity long after his death. Among other honors, Hatton is the namesake of the Rondo Hatton Classic Horror Awards

, which annually award research into and preservation of classic horror movies.

The man exemplifies these tropes: