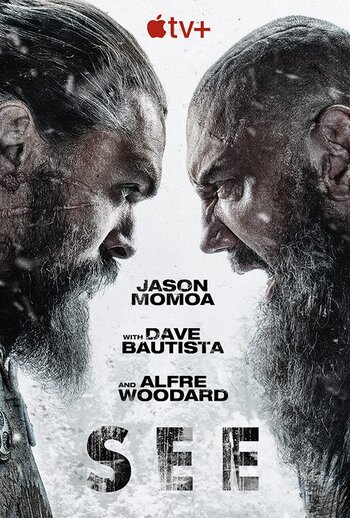 See is a Post-Apocalyptic Science Fiction series created by Steven Knight in 2019. It is produced by Apple and available exclusively on Apple TV+.

Set a few centuries in the future, near what used to be called the Mississippi river, after an apocalyptic plague reduced the human race to less than two million worldwide. Those who survived and their descendants were struck blind and are forced to live using their remaining senses. Some believed that the plague was sent by God to take away humanity's sight and as time passed the ability to "See" has been almost totally forgotten except by those who consider "Vision" and "Color" and "Reading" to be evil and heretical.

High in the Sungrave Mountains exists the Alkenny village, a tribe of a few dozen people, led by their Chief warrior Baba Voss (Jason Momoa). One day, his wife Maghra (Hera Hilmar) goes into labor and gives birth to the children she was pregnant with when she was adopted by the Alkenny. The only thing is, the man who fathered the twins could see. And so can his children.

A third season has been greenlit.