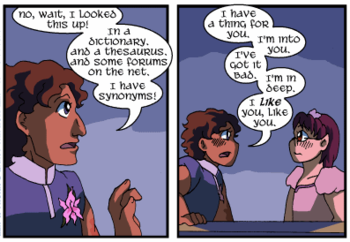 Imagine how many international conflicts could be avoided if everyone communicated this clearly.
In the nation of Ceannis, a prophecy has been revealed. Dragonslaying hero Sir Thorn Estragon and his team of loyal knights must be tasked with the solemn duty...of standing guard outside a foreign embassy. And if they do it long enough, it'll save the world. Or something.
Advertisement:

Leif is a gardener at the embassy, serving his native Sønheim in order to pay off a mysterious debt. Thorn doesn't speak Leif's language too well when they first meet, but he's about to find a lot of reasons to get better.

And they're only the main characters in an increasingly large cast, all facing their own variations on figuring out how to communicate across cultural boundaries, deal with traumas and scars, use magic for practical solutions, and pick just the right song for karaoke night

shows that no matter the world, people are alike all over.

Updates six strips a week, with art pieces on Saturday.

Tropes found in the comic are: