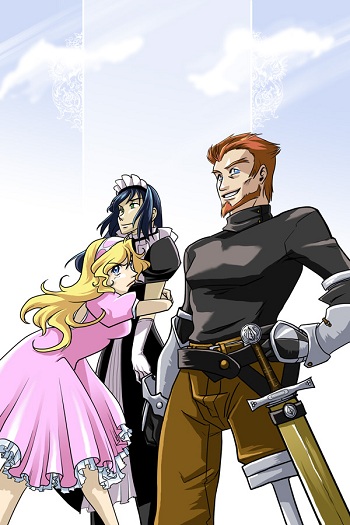 is a story about a maid and a princess who go on an adventure to save the kingdom from the misguided rule of King Meavian XIII, Princess Lavender's father, and what they might discover about themselves along the way. Felicia has more than one secret to reveal, and Lavender is tougher than she appears. They are joined by the retired knight, Sir Grengis, and are sure to recruit more strange people in their quest.
— The official introduction

Lavender Legend is a Low Fantasy webcomic that uses the classic "Topple the evil King" quest plot to frame some very poignant questions about free will, identity, and attraction.

Set in the medieval kingdom of Maeve in the slightly magical land of Ever, the story introduces us to Princess Lavender, a naive Blue Blood effectively imprisoned within an opulent manor and forbidden to see or be seen by any males by order of her father, King Meavian. She is aware that there exists more to life than tea parties and desserts, and that her father has been waging a ruinous religious war against the neighboring country of Amonun for years, but she is initially powerless to change anything and is despondent over her impotence.

Working at her beck and call are a small team of female maids, including the tall and aloof Felicia, who is far more serious and dour than the other girls.

Lavender and Felicia quickly form a close bond, and soon vow to leave their respective lives behind them in order to face the king and demand answers from him, even as they try to figure out what they mean to each other... and what Felicia's identity means to himself.