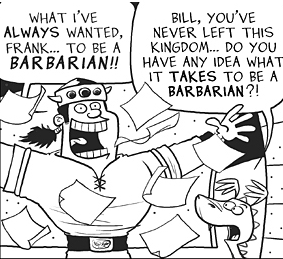 No Frank, Bill has absolutely no idea.
Advertisement:

is a webcomic started in 2008 by David Reddick. It started as a Gag Per Day Webcomic, albeit not being a daily issue, but gradually turned into a grandiose epic featuring dozens of characters. Some of the recurring characters even led to two spinoffs: Barwench Tales and The Gnome Syndicate.

The story's main characters are Bill, an overly buff guy with a bit of a child mind as The Hero, and Frank, a blue dragon as the Lancer.

The premise starts as Bill, an accounting clerk tired of his daily job as a pencil pusher, decides to start a new life as a Barbarian Hero. Hilarity Ensues.

Legend of Bill provides examples of: