Webcomic / The Legend of Genji 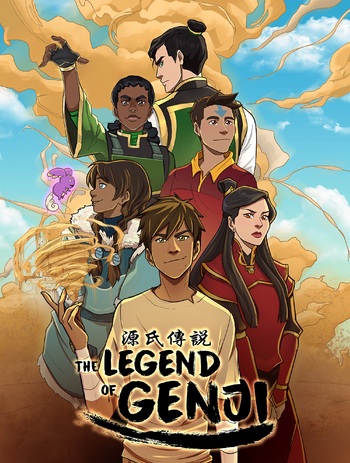 A new legend begins...note Clockwise from front: Genji, Nami, Po, Maya, Luan, Kalsang, and Aiko Hibana.
"The future may be uncertain, but Korra's spirit lives on. I have faith that the cycle of the Avatar has begun anew."
— Jinora's eulogy in the prologue
Advertisement:

The Legend of Genji is an Avatar Fan Sequel webcomic series set thirty-five years after The Legend of Korra. It was created by Macky Neal

and a team of volunteer writers and artists from around the world.

The next Earth Avatar, a sandbender named Genji, is born into a world of political instability, social revolution, and looming war. When the White Lotus is unable to locate the next Avatar, they begin to fear the cycle may have ended forever. Watching the world fall into disarray, certain individuals decide to take matters into their own hands, creating their own perfect Avatar to bring light and hope back to the world. Genji will discover the truth about his own identity and embark on a journey to understand who he is and what it means to be a modern Avatar.

The first part of Chapter 1 was released on April 16, 2022, with subsequent parts being uploaded on a biweekly schedule. The webcomic can be read here

on Webtoon. It is also available as a motion comic

The Legend of Genji provides examples of: