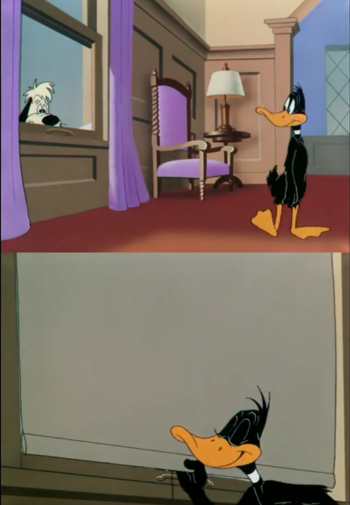 Tallest Purple: Malfunctioning SIR units. Hey, these things are dangerous! Anyone who gets their hands on these could really get hurt! Send them to Zim!
Tallest Red: [gasps] But they'll destroy him!
[Beat. The two then share a laugh.]
Tallest Purple: Let's go eat food.
— Invader Zim
Advertisement:

You ever notice a small conversation between two people and said conversation ends up being about a certain scenario where a potentially bad thing may be afloat and one of the characters in the conversation ends up showing some concern about said bad thing...then the people conversing end up having a good laugh as said concern was just a joke.

If a particularly unkind character is doing this, then they may be a Jerk with a Heart of Jerk.

This could be a sub-trope for No Sympathy and Refuse to Rescue the Disliked where the conversing party at first shows concern for someone when they are in a bad situation but laugh it off as they don't really care about the person being in the state. May often double with Skewed Priorities if someone appears to be worried about someone, only to reveal that they're more interested in something inconsequential.

Compare Bait-and-Switch Sentiment. Contrast to HA HA HA—No where a character laughs at something but gets serious.