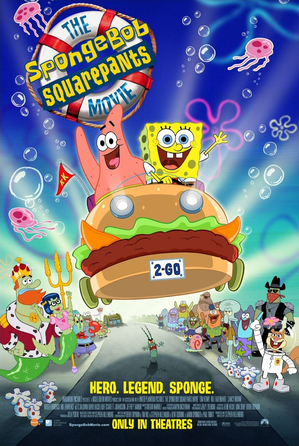 In the film, Mr. Krabs opens up a second Krusty Krab-restaurant, and SpongeBob is heavily anticipating being promoted to manager of the new restaurant. But to his dismay, Squidward gets the job instead because Mr. Krabs feels that SpongeBob isn't mature enough for the job. Meanwhile, Plankton finally stops fooling around and enacts his greatest plan to steal the secret Krabby Patty formula — he steals King Neptune's crown, sends it to the dangerous Shell City, and frames Mr. Krabs for it. When Neptune finds his crown missing, he crashes the Krusty Krab 2 and charges Krabs for the theft, but SpongeBob is willing to travel to Shell City to retrieve the crown, so Neptune gives him six days to find it, during which he has Krabs frozen.

While SpongeBob and Patrick head off on their adventure, Plankton makes it past the frozen Krabs and successfully steals the Krabby Patty formula. He then gives away bucket-helmets with all the Krabby Patties he sells, which then turn his customers into his monument-building slaves. Can SpongeBob and Patrick successfully retrieve Neptune's crown and save Bikini Bottom...?

Series creator Stephen Hillenburg intended for the movie to serve as a Finale Movie to the series, but Executive Meddling got in the way of that. Many fans widely accept it and consider it a spectacular love letter to the original series. It also received positive critical reception, earning a 69% on Rotten Tomatoes, which may not sound like much, but it's pretty damn good for a Nick movie.

A second movie titled The SpongeBob Movie: Sponge out of Water was released on February 6, 2015. The writers from Kung Fu Panda 2 were put on board for screenwriting,

and had then-series showrunner Paul Tibbitt directing the animated sequences, while Sky High (2005) director Mike Mitchell directed the live-action sequences. Its second sequel, The SpongeBob Movie: Sponge on the Run, released digitally in 2021, was fully computer-animated.

This first film was released to theaters on November 19, 2004 to commercial and critical acclaim, and quickly became a blockbuster, despite being out-grossed by The Polar Express.

Shares a Character Sheet with the series.