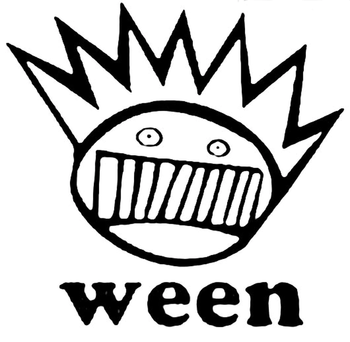 Can U taste the waste?
Influenced by:
"Out of nowhere, out of the total musical vacuum, out of total darkness comes one, one, ONE ray of light... and it's fucking Ween."
—Henry Rollins, 1990
Advertisement:

Ween's a band. Ween is Two Guys: Dean Ween and Gene Ween, no relation. They met in junior high in New Hope, Pennsylvania. They make the songs with the music, the music and the Scotchgard.

They're multi-instrumentalists and sometimes the only performers on their albums. Gene is usually the lead singer, and Dean the lead guitarist.

The band is known for their Genre Roulette sound, playing anything from hardcore punk to country to prog rock to cheesy pop music. They are commonly thought to be a comedy band, though while they have many humorous songs, their music is mostly serious.

Gene announced that he was retiring his "Gene Ween" alter ego and more or less declared the band broken up, much to Dean's surprise, in 2012. However, they reunited for a series of shows in 2016, and have continued to do so from 2017 onwards.

Stuck in my cabana, living on bananas and Tropes: