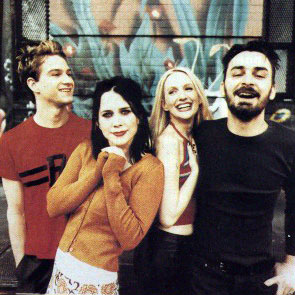 Don't be fooled, they can rock out hard enough.
Volcano Girls, we really can't be beat,
Warm us up and watch us blow.
But now and then we fail and we admit defeat,
We're falling off, we are watered down and fully grown!
—"Volcano Girls"
Advertisement:

Veruca Salt are an Alternative Rock band from Chicago, formed in 1993. Named after a character from Charlie and the Chocolate Factory, the band had some initial success in The '90s before fading out of view.

The first and most famous incarnation of the band coalesced around Louise Post and Nina Gordon, who both played guitars, sang, and wrote almost all the band's songs (barring some covers and a co-write). Soon enough, they filled out the band with bassist Steve Lack and Nina's brother Jim Shapiro on drums, and gained a record deal with Minty Fresh Records. Their first album, American Thighs, boasted their trademark The Pixies influenced Power Pop and became reasonably successful, chiefly due to Gordon's "Seether" being released as a single and Brad Wood's Grungey production helping it appeal to the alt-rock audience.

After buying time with a noisier, harsher EP called Blow It Out Your Ass It's Veruca Salt, the band moved to Geffen Records and began working on their next album with Bob Rock, apparently because they were impressed by his production for Metallica's Self-Titled Album. The result was Eight Arms to Hold You, which once again became successful due to a Gordon lead single, namely "Volcano Girls" (the Colbert Bump it got from being in the credits of Jawbreaker may have helped). However, the band failed to sustain its momentum as subsequent singles from the album tanked on the charts and Shapiro left after the album was released, being replaced with Stacy Jones for the supporting tour.

The band acrimoniously collapsed only a year later as Gordon left with Lack after arguments with Post. Post re-organised the band, bringing in new members to an almost Revolving Door Band-like degree, and recorded two more albums: Resolver, which got a lukewarm reception due to its unfocused nature and Author Tract-like tendency to throw potshots at Gordon and various other targets, and IV.

Then the unthinkable happened, in March 2013 an announcement was made on the band's official Facebook saying "hatchets buried, axes exhumed" - officially Putting the Band Back Together. Fan's patience was finally rewarded with the release of a new song "The Museum of Broken Relationships" in April 2014 followed by the band embarking on a US tour. A second new song "It's Holy" was released during the tour. A brand new album, Ghost Notes, followed in 2015 cementing the band's return.

Tropes are, neither, big nor small...