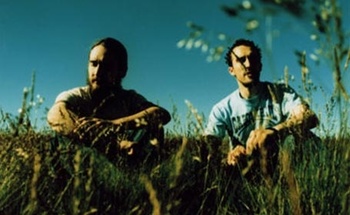 Creating "the last sounds of a dying machine from The '70s that just got recently excavated" since The '80s.
Influences:
Come out and live with a religious community in a beautiful place out in the country.
Advertisement:

Boards of Canada (BoC for short) are an electronic music duo formed of Scottish brothersnote For a while, they pulled a move akin to The White Stripes and pretended they were just friends; when asked why, they explained that they didn't want to attract needless comparisons to Orbital, another Sibling Team electronic band Mike Sandison and Marcus Eoin, known for their psychedelic, trippy style of downtempo-type music as well as the unique pastoral aesthetic that helped differentiate them from the more synthetic contemporaries of their time.

Their music often uses a combination of electronic and traditional instrumentation, heavy analogue sound manipulation and processing, trip hop-influenced beats, and frequent sampling, usually taken from field recordings and old seventies media. (Their name is actually a nod to such media through the documentaries produced by the National Film Board of Canada, which they were heavily influenced by as their family moved to Canada during their childhood.)

While the mood evoked by BoC's music is usually sunny, optimistic, soothing, and vaguely nostalgic, the brothers have been known to dip into darker territories well every now and then, especially on Geogaddi and Tomorrow's Harvest.

BoC has existed since 1986, when Marcus joined Mike's band, but ever since 1989 the band has consisted solely of the Sandison brothers. Their early songs were released through self-financed cassette releases on their Music70 label, but since 1998, their albums have appeared through Warp Records.

David Firth loves them. Sean Booth is also a fan, as he signed them to his label Skam Records and had them open for a few Autechre shows.

You can now vote for your favourite Boards of Canada album HERE!

The first five have more or less only been heard by the band and their friends; the last four were never released but all tracks are easily found on the Internet. Twoism is the only one that was officially released, though several Boc Maxima tracks made it onto Music Has The Right To Children.