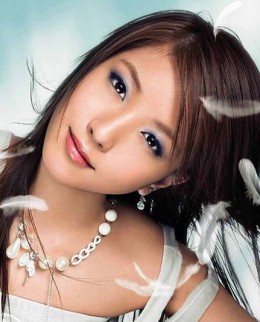 Don't let this sweet, innocent visage fool you. Homegirl can serve it like no other!
This is who I am so I just wanna be true to myself
(That's just the way I like it, don't wanna be somebody else)
If you could understand, why it's never enough
(I'm gonna make it happen, who says there can't be girls on top?)
— BoA, "Girls On Top"
Advertisement:

BoA is an immensely successful Korean Pop Music star who has been branded "The Korean Britney" by her fans and the media alike. She is most well known for her catchy music as well as her crazy dance skills and her ability to sing live decently while doing said dancing. She has sold upwards of 25 million albums in Asia alone and is only rivaled by Hikaru Utada and Ayumi Hamasaki in terms of overall album sales.

Born Kwon Boa on November 20, 1986, she was raised in the Gyeonggi-do province of South Korea and initially had no interest in pursuing a career in the entertainment industry. That all changed when she was scouted by Korean entertainment company SME at a talent search that she accompanied her brother to. SME saw what they were looking for in the then 11-year-old BoA; a young star who would allow Korea to break into the fickle and often closed-off entertainment industries in both Japan and in the United States. After two years of training she released her debut effort, titled ID; Peace B. The album was a success and paved the way for her to pursue a career in the Japanese music industry. Two years after her Korean debut she released her debut Japanese album, Listen To My Heart. The album was a success and BoA quickly became one of the premiere pop idols of Japan, being the first non-Japanese Asian singer to have two million-selling albums in Japan (Valenti and her best-of album Best Of Soul). She also went on to become one of only two artists in Japan to top the Oricon weekly album charts six consecutive times (the other artist being Ayumi Hamasaki).

In 2009 SME decided that it was finally time to break into the U.S. market; they chose BoA as the flagship artist for their new American label. BoA collaborated with high-profile producers such as Bloodshy & Avant, Britney Spears and Sean Garrett during the recording process. She released her English-speaking debut in 2009 to less-than-stellar reviews and even worse sales; the album stalled on the Billboard charts and was unable to sell even 10,000 copies. The three singles from the album became minor hits on Billboard's Club Airplay charts but it soon became apparent that BoA's stateside debut was a bust. "Look Who's Talking" was written by Britney and featured in the album.

BoA returned to Japan to release her seventh Japanese studio album Identity in 2010; the album didn't fare much better on the charts than her English album did though. However, she experienced a slight resurgence in her career when it was announced that she would release her first album of Korean music in five years later that fall. Hurricane Venus went on to spawn a number one hit with the title track and would go on to be the highest-selling album from a solo artist that year.

Although her first attempt at success in the American music market didn't go that well, it seems like BoA may be getting another shot at fame, thanks in large part to the growing presence of K-Pop in the U.S. She appeared in a dance-themed movie titled Make Your Move 3D in 2014. Anime fans might know about her from her closing song for Inuyasha called "Every Heart."