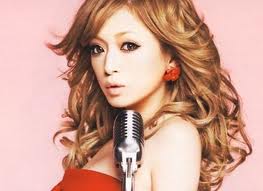 "In the beginning, I was searching for myself in my music. My music was for me. I didn't have the mental room to be conscious of the listener; I wrote to save myself.”
Advertisement:

Ayumi Hamasaki (often stylized as 'ayumi hamasaki', Japanese: 浜崎あゆみ), often known as Ayu, is a Japanese singer-songwriter who has been dubbed the Empress of Pop because of her popularity and widespread influence in Japan and throughout Eastern Asia. She is known for her tight control over her artistry and ever-evolving appearance in addition to the numerous domestic records she holds. She is the best selling female and solo act in the history of Japanese music, and has earned the most #1 singles both consecutively and overall.