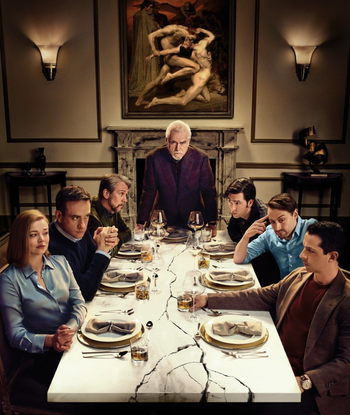 "By profession I am a soldier and take pride in that fact. But I am prouder—infinitely prouder—to be a father. A soldier destroys in order to build, the father only builds, never destroys."
— Douglas MacArthur
Advertisement:

This is the Spear Counterpart to an Apron Matron. He is a tough family male elder and he just oozes authority wherever he goes. Likely he will be head of The Clan, a Cool Old Guy, and possibly an Old Master. Younger versions are allowed, though usually not too young. Just as an Apron Matron is a badass woman whose formidability is tied to running the family, he is a man whose formidability is associated in the same way.

He will naturally have traditional ideas about how family responsibility should be run, thinking for instance that Manly Men Can Hunt, but women should Stay in the Kitchen. There may be subtleties to his opinions in this matter of course, but that does not change the basic theme. These specialty differences will naturally distinguish him from an Apron Matron as well as causing Values Dissonance with many.

He will likely be an Overprotective Dad and perhaps a Knight Templar Parent. On the plus side he will almost certainly be a very efficient Papa Wolf if any of his people are in danger, especially his young daughters, doubly so if he only has one daughter among several sons. He will definitely be the family's Team Dad, whatever else he is. Villainous Patriarchs will often be Abusive Parents, and/or a Fallen Hero . They might also be The Don in The Mafia. Heroic ones will tend to have rough edges, though they will often be the Mentor for children, nephews, and grandchildren. This kind of character is often also a Determined Homesteader, and a Wasteland Elder.

A common plot is where the Patriarch is too much The Stoic to give a So Proud of You until the very end. It may be meant to tragically come too late. And if a Patriarch is married to an Apron Matron, then we shall have something to see... This trope may be less common now and milder father-figures seem to be somewhat in vogue, but it still persists.

Similarly, the Patriarch's overbearing authority may crush his sons into mere Nice Guys, whom he can not respect for their spinelessness. A nastier sort may try to crush rebellion with the threat of his will and finally despise them as the spineless Nice Guys and Dutiful Sons he made them, declare them Inadequate Inheritor, and opt for Passed-Over Inheritance. This may be why the Black Sheep is his favorite..

See also Reasonable Authority Figure, A Father to His Men. Indeed, if there's a Blue Blood in a society where this is important, it will frequently overlap with these tropes.

Might be the eldest generation of the Three Successful Generations.