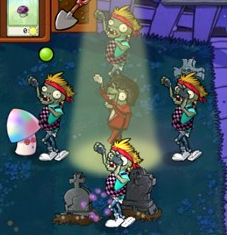 The Dead Can Dance + Mook Maker^Thriller = You're boned.
Whenever it's time for a musical number, the lead dancer and singer (whether hero or villain) can usually pull any Innocent Bystanders into a Crowd Song, and thanks to Spontaneous Choreography have them all dance and sing in perfect sync.
Advertisement:

Some leads can go a step further. Rather than make do with whoever is nearby, or go solo if there's no one else around, they can Summon Backup Dancers from out of sight, bringing a battalion of ballerinas to dance at their side. To make this more impressive, they'll usually be summoned directly from the Universe of Wardrobe and Costuming after having been fitted in perfectly appropriate attire for the song in question.

If this trope applies to an enemy, it's an Enemy Summoner or Mook Maker. Shoot it immediately.

This trope isn't usually a magical spell that can summon dancers like a wizard can summon monsters (though in a wacky enough series, it may well explicitly be one), more often it's an implicit rule of the cosmos. Anyone who goes into a musical number will get accompaniment, even if it requires the Spontaneous Generation of said dancers from hard vacuum. Other times, it can be humorously justified by the lead in question training friends, allies or subordinates beforehand and instructing them to hide out of sight and march out on cue for their big song.

If this is a magical ability of some type, the backup dancers may help out by dance battling alongside the summoner.

Intro part of the Simon Zealotes song in the '73 film.

Intro part of the Simon Zealotes song in the '73 film.