The Dead Can Dance 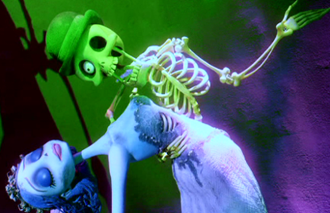 It's a dead man's party; Who could ask for more...
"With bony hands I hold my partner,
On soulless feet we cross the floor.
The music stops as if to answer
An empty knocking at the door.
It seems his skin was sweet as mango
When last I held him to my breast,
But now, we dance this grim fandango
And will, four years until we rest."
— Olivia's poem, Grim Fandango
Advertisement:

What do the dead do? Why, dance, of course. (Vampires and skeletons especially, it seems.) It's the hidden language of the soul (whether they have a soul or not). And if the dead aren't immediately chowing down on you, they may end up leading you in a jaunty tune. This probably stems from the Danse Macabre

, a medieval allegory about how death unites everyone — how no matter your station, everyone does the "dance of death." And who doesn't want to dance? So if you're a bloodsucker, a bag of bones, a bawling banshee or the bleak bringer of biolysis, you can still boogie to the beat.

People who are hanged by the neck are sometimes said to dance "the hemp fandango", "the sisal twostep" or "the gallows jig", a quite-literally-Gallows Humor reference to the way people would thrash at the end of the rope (usually as a result of the condemned strangling to death rather than having their neck snapped by the fall).

May or may not be related to the band Dead Can Dance. See also Monster Mash, Skeletal Musician, Mummies at the Dinner Table and I Love the Dead. If the dead in question are zombies, then there's a good chance of them performing a Michael Jackson's "Thriller" Parody. May also involve Xylophones for Walking Bones or Creepy Ballet.

Swing, You Sinner! (1930) - In this short, Bimbo finds himself in a graveyard where the ghosts there don't take kindly to his ways of debauchery (gambling, chasing skirts, stealing chickens, etc) and decide he must pay... in song form!

Swing, You Sinner! (1930) - In this short, Bimbo finds himself in a graveyard where the ghosts there don't take kindly to his ways of debauchery (gambling, chasing skirts, stealing chickens, etc) and decide he must pay... in song form!