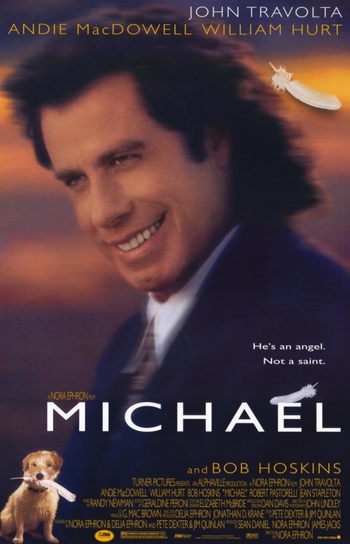 Michael is a 1996 comedy-fantasy film directed by Nora Ephron and starring John Travolta as Archangel Michael.

The film starts with the workings of the "National Mirror", a Chicago-based tabloid which specializes in unbelievable tales. Vartan Malt (Bob Hoskins), the editor, has just heard the story of an old woman living with an actual angel somewhere in rural Iowa. He immediately sends a team to investigate. Well, it's not exactly the best team, but it will have to do. Frank Quinlan (William Hurt), is a cynical reporter whose career has declined over the years. Huey Driscoll (Robert Pastorelli) is a naive photographer. His main claim to fame is bringing to the newspaper Sparky the Wonder Dog, its recognizable mascot. The dog joins missions and has become a media darling, since for some reason the public loves it. The trio is accompanied by newbie Dorothy Winters (Andie MacDowell), a supposed "angel expert". Actually, a dog trainer intended to replace Huey, not that the other two know.

The trio visit the elderly Pansy Milbank (Jean Stapleton) and meet her housemate Michael. He has the wings of an angel. But hardly the stereotypical behavior. Michael is a womanizer, a chain-smoker, addicted to sweets and his speech contains several vulgarisms. He claims that angels are allowed to take vacations on Earth. Well, this is the last vacation allowed to him. He is going to enjoy it to the fullest.

Milbank suddenly dies. Michael joins our trio in a road trip to Chicago. He wants to see the Sears Tower before leaving for good. Several events follow. Including Sparky getting killed by a truck and then resurrected by Michael. Meanwhile, sexual tension develops between Frank and Dorothy. Which leaves them uneasy, because they have a history of poor relationships. By the end of the film, Michael departs. After ensuring that Frank and Dorothy are getting married. As he explained much earlier in the film, "I invented marriage".