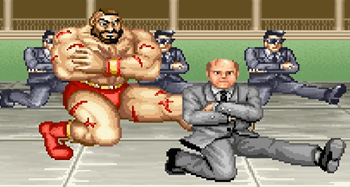 You know the one — the dancers squat down with their arms folded and kick high with one leg and the other, sometimes intercalating more squats up and down between flurries of kicks. If a Husky Russkie is celebrating a victory for Glorious Mother Russia, he is 90% likely to be doing this dance.

This trope's name is one of those cases of mislabeling by foreigners. For instance, its origin is actually both Russian and Ukrainian, and it's not commonly called "Cossack Dance" or some derivate. While it does receive occasionally the names of Kozatsky or Kazatsky, which mean just that, the true name of this stage dance is Hopak

or Gopaknote Spelled Гопа́к in the Cyrillic alphabet. which comes from the word hopaty meaning "to hop", so a better translation of its name would be "The Hopping Dance". Similarly, it gets sometimes referred as the Kazachok or Kozachok ("Little Cossack"), but this is a completely different folk dance that also comes from Russia and Ukraine. The squat dance is also a integral part of Russian dances like Barinya, Leto, Trepak and many more.

The dance is commonly depicted with dancers barking "Hey! Hey! Hey!" while squatting, which is another point of mixing things up and thinking that all Russians say "Hey!" while dancing not just like this, but in any other style. On occasions, it can be substituted with "Hop! Hop!"note If actual Russians were dancing, they would shout "Op! Op!" without any h's.

The squat-and-kick move itself is properly called prisyadka (knee-bending) and is just one part of the Hopak dance, but it's the only part known to most non-Russians due to its inherently funny looks and obvious athleticism required. It's indeed one of the more difficult parts of the dance, requiring good balance and substantial leg muscle strength, but of course Mother Russia Makes You Strong. In fact, there is an entire martial art based on Hopak dancing called Combat Hopak

. Prisyadka moves can also be incorporated into the shashka dance, performed with the long Cossack sabre and which involves complex evolutions of movement with the sword.

Despite what is stated above about its origins, Norwegians pride themselves by stating that Russian folklore actually learned this from them. The "squat" is essential in the Norwegian male dance ''halling''

Also, don't confuse this with the "Slav Squat

Probably the most Slavic dance taunt in the whole game. When you think of the Soviet Union, you think of one thing: the freedom to laugh and love and sing and dance!

Probably the most Slavic dance taunt in the whole game. When you think of the Soviet Union, you think of one thing: the freedom to laugh and love and sing and dance!